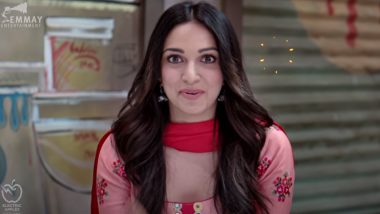 Kiara Advani's Indoo ki Jawani may or may not have an OTT release but we are hella excited to see what's lying in store for us on September 16th. The makers of her next shared the film's first promo wherein Kiara is seen describing how she has a date night planned on September 16. The 'date' in here could be a metaphor for a big announcement where the makers will either announce the film's release date or simply suggest if it will go the OTT way. Kiara Advani Wraps Up ‘Indoo Ki Jawani’, Celebrates with Aditya Seal and the Entire Team (Watch Video).

Indoo ki Jawani will see Kiara as a small-town girl from Ghaziabad whose left swipes and right swipes on a dating app result in hilarious chaos. Student of the Year 2 fame, Aditya Seal will star opposite the Kabir Singh actress in this heroine-centric project. There was a lot of speculation on Indoo ki Jawaani coming on Netflix along with other prominent names who resorted to direct-to-web format. However, the makers have denied its possibility time and again. Kiara Advani's Neon Green Jumpsuit is a Good Investment if You Think Rs 25,000 is Pretty Cheap!

Kiara Advani is also gearing up for another OTT release in Akshay Kumar's horror-comedy, Laxmmi Bomb. The film is an official remake of Tamil hit, Kanchana. Besides this, Advani also has Shershaah with Sidharth Malhotra, Bhool Bhulaiyaa 2 with Kartik Aaryan and another romantic dramedy with Varun Dhawan.

(The above story first appeared on LatestLY on Sep 14, 2020 02:33 PM IST. For more news and updates on politics, world, sports, entertainment and lifestyle, log on to our website latestly.com).