EXCLUSIVE! Is Mardaani 2 Inspired by Vishnu Vishal’s Ratsasan? Rani Mukerji Has THIS to Say on the Comparison!

The trailer of Mardaani 2 created a lot of buzz when it came out on November 14, 2019. The sequel to the 2014 film Mardaani, the movie brings back Rani Mukerji as the daring police officer Shivani Shivaji Roy. 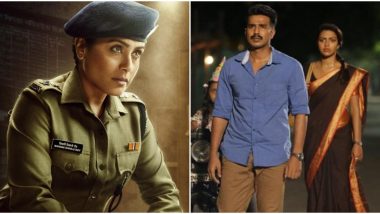 The trailer of Mardaani 2 created a lot of buzz when it came out on November 14, 2019. The sequel to the 2014 film Mardaani, the movie brings back Rani Mukerji as the daring police officer Shivani Shivaji Roy. In the first film, the cop had to tackle a young but smart kingpin of child and drug trafficking. In Mardaani 2, she finds another deadlier foe in an unseen serial killer who is killing young girls and then mutilating their bodies. Not to mention, taunting Shivani on phone. Mardaani 2 Trailer: Rani Mukerji is Back as the Badass Cop Shivani Shivaji Roy Who Will Fight Hard to Stop Crimes Against Women (Watch Video).

After the trailer came out, Tamil movie buffs found the premise of Mardaani 2 similar to that of the 2018 Tamil film Ratsasan. Ratsasan was a psychological investigative thriller starring Vishnu Vishal and Amala Paul in the lead. Vishal plays a police officer who decides to go after a serial killer who is brutally killing schoolgirls before dumping their mutilated bodies.

The movie was received well by the critics, and was a hit at the box office. Ratsasan was also remade in Telugu as Rakshasudu. Mardaani 2 Trailer: Is Rani Mukerji’s Cop Thriller Inspired by Vishnu Vishal and Amala Paul’s Tamil Film Ratsasan?

So is Mardaani 2 inspired by Ratsasan? Well, let's hear it straight from the lead actress herself about her thoughts on this. In a chat with LatestLY, Rani Mukerji was asked about the comparisons made between Mardaani 2 and Ratsasan. To which, she replied, "I would like to say it (the similarity) is a coincidence. I've not seen the film that you are talking about. Mardaani 2 is a fictional story. It is inspired by true events. So you'll have to see the movie before judging it to say."

Fair enough. With Mardaani 2 coming out on December 13, 2019, it is a mere matter of days, before we can judge if Bollywood looked Southwards again for inspiration! Mardaani 2 is directed by Gopi Puthran, and has Vishal Jethwa as the main antagonist.

(The above story first appeared on LatestLY on Nov 22, 2019 08:52 PM IST. For more news and updates on politics, world, sports, entertainment and lifestyle, log on to our website latestly.com).