Janhit Mein Jaari: Nushrratt Bharuccha Starrer To Get a Sequel, Makers Plan To Make It With a New Subject

Nushrratt Bharuccha-starrer Janhit Mein Jaari, which is a story of a young girl selling condoms, is going to have a sequel with another riveting subject issued in public interest as planned by the makers of the film, reveal sources. 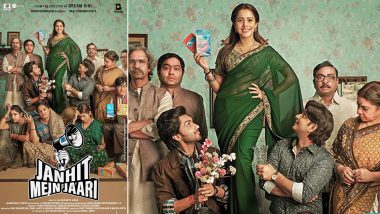 The film was made on a budget of Rs 20 crore including the cost for prints and advertising worldwide, it has already recovered Rs 23 crore in its satellite, digital and music rights. Additionally it received a Rs 2 crore subsidy from the Madhya Pradesh government and close to Rs 4 crore at the box office. Janhit Mein Jaari Box Office Collection Day 3: Nushrat Bharucha’s Film Stands At A Total Of Rs 2.19 Crore.

As per sources a south production house has approached Bhanushali Studio Limited for the Tamil, Telugu and Punjabi remake rights of Janhit Mein Jaari with an A-list female star in each language. The film sparked much-needed conversation around the taboo subject and it would be interesting to see how it's adapted for different regional audiences!

(The above story first appeared on LatestLY on Jun 28, 2022 06:06 PM IST. For more news and updates on politics, world, sports, entertainment and lifestyle, log on to our website latestly.com).