John Abraham And Emraan Hashmi React To Aamir Khan Quitting Social Media, Say They Wanted To Do The Same

John Abraham and Emraan Hashmi have similar thoughts regarding Aamir Khan quitting social media. Both wanted to do the same from time to time. They also elaborated how the trolls on these sites spew hate for reason best known to themselves. 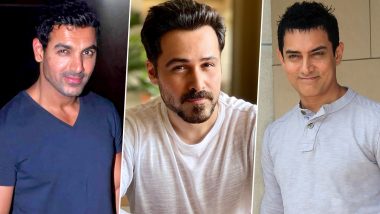 One fine day, Aamir Khan announced on Instagram that he is quitting it and all news about him and his films can be found in his movie production's insta handle. Everyone was in shock. Many felt the incessant Bollywood abuse that happened last year must have made the actor decide on it. His post however quipped that he was anyway not active on social media as much as others so, he decided to close it down. Now when Emraan Hashmi and John Abraham were asked to comment on it, both admitted that they too wanted to do the same a few years back. Mumbai Saga Box Office Collection Day 2: John Abraham-Emraan Hashmi Gangster Drama Earns Lesser Than Day 1, Total Stands At Rs 5.22 Crore

John told TOI, " I was planning to do that (quit social media) years ago.  I have a very strong take on that. Managers and producers tell actors what to do, and even actors, sometimes, get drawn into the trending business. But when managers say that you’re trending on Number 2, an actor needs to say that this is not the poison I need to get into this, these things are a very dangerous place."

Emraan on his part said that he is fine with opinions but not hate spewing. He said, "Not because they have anything personal with us; I truly believe it’s because there is something messed up. Life might have been unkind to them, that’s why they’re venting it on us. I’ve seen people on YouTube spew hate; if you have the time to do something like that, there is something messed up there."

We couldn't have worded any better than Emraan on how people on social media feel entitled to comment on just about everything.

(The above story first appeared on LatestLY on Mar 21, 2021 06:54 PM IST. For more news and updates on politics, world, sports, entertainment and lifestyle, log on to our website latestly.com).