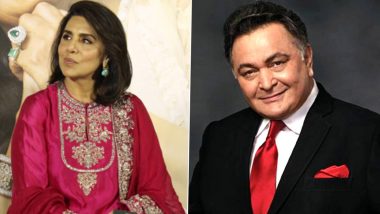 Actress Neetu Kapoor, who is making her comeback after the demise of her husband, veteran actor Rishi Kapoor, got emotional during the trailer launch of her film Jug Jugg Jeeyo on Sunday. During an interactive session, Neetu said: "I cannot really be more thankful than Karan who motivated me, pushed me to take up the film and even though, during the filming, we went through a lot, finally we are here, the film is completed."Jugjugg Jeeyo Trailer: Varun Dhawan, Kiara Advani, Anil Kapoor and Neetu Kapoor Promise the Biggest Family Entertainer of the Year (Watch Video).

"I am sure wherever Chintuji is, watching the film and feeling very happy for us, for the film Raj (Mehta) has made. I wish he was here though. It is my comeback with a Hindi film and I am really emotional and excited at the same time," added the veteran actress. In the film, the actress is playing the on-screen wife of Anil Kapoor and the on-screen mother of Varun Dhawan. The makers started shooting the film last year, and the actress said why taking up the film was the best decision of her life.

"I was emotionally going through so much (referring to the demise of Rishi Kapoor, April 30, 2020), and somewhere the film helped me to come out of it. I thank Karan and Raj because their support was the most important element for me to face the camera again and try to act again. It was emotionally a hard time for me. Now the trailer is out. My son Ranbir hasn't watched the film but I am sure he is going to love it," shared Neetu.

(The above story first appeared on LatestLY on May 22, 2022 08:48 PM IST. For more news and updates on politics, world, sports, entertainment and lifestyle, log on to our website latestly.com).