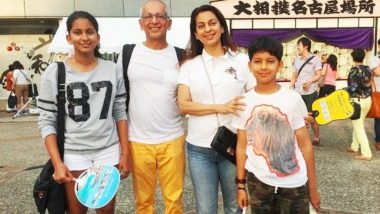 Juhi Chawla is the heartbeat of the '90s Hindi cinema. And Juhi Chawla's kids won't watch her movies. As scandalous as that may sound, Juhi's son Arjun has a legit reason. In an interview, the actress revealed that her kids aren't very comfortable with watching her romance someone on screen. Well, they are kids, after all. Maybe in a few years, they will discover gems from Juhi's filmography like My Brother Nikhil, 3 Deewarein, et al. The actress tried to make Arjun and her daughter Janhavi watch a few films of hers, the earlier ones, but they were reluctant and embarrassed. Juhi Chawla Shares a Gorgeous Pic Which Will Make You Sing 'Jadu Teri Nazar'.

"Actually, they are very embarrassed to see my films, especially the earlier ones. In fact, my husband (Jay Mehta) told them to watch Hum Hain Rahi Pyaar Ke saying that it’s quite a cute film. Then, Arjun asked me, ‘Mom is there romance in that film?’ and I was like, ‘yes, it is a romantic comedy.’ To this he replied, ‘I don’t want to see your films that feature romance. It gets very strange. So, I am not going to watch any of your films.’ And that’s it! They don’t want to watch any of my films," Juhi told The Times of India. Juhi Chawla Is Upset About Her Home-Delivered Vegetables Packed in Plastic, Says ‘The Educated People Creating the Biggest Mess’.

Juhi recently shot for a commercial, which should see on our screens soon.  She has been roped in as a brand ambassador of the hygiene range of a popular beauty brand. She is one of the few actors who have resumed work during the pandemic, of course, with all the restrictions and safety regulations in place. Juhi Chawla was last seen in Ek Ladki Ko Dekha Toh Aisa Laga, where her comic timing was appreciated once again. She will be next seen in Sharmaji Namkeen, which will be Rishi Kapoor's final screen appearance.

(The above story first appeared on LatestLY on Sep 30, 2020 07:35 PM IST. For more news and updates on politics, world, sports, entertainment and lifestyle, log on to our website latestly.com).