Karan Johar took to his Instagram account and shared a video which sees his kids, Yash and Roohi fed up of staying indoors. Well, what happens ahead, check it out! 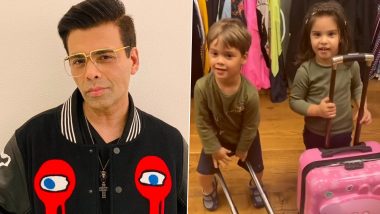 Karan Johar's Instagram account has been LIT ever since he is quarantined with his kids, Yash and Roohi. The moviemaker has been on a roll and daily shares a video or two of his children being just themselves. From making fun of KJo's tummy, bashing his style to even spotting Shah Rukh Khan in his walk-in closet, the twins are super hilarious. But if you happen to be a sucker of Karan's #LockdownWithTheJohars series then here's a piece of sad news for you all. As the director via his latest IG post has decided to go on break and will resume season 2 of the same soon. Karan Johar's Kids Yash And Roohi Make Him Weep - Here's How (Watch Video).

Karan finally made it official that his homemade show with his kid has finally completed season one. In the video shared, we can see the three-year-old kids Roohi and Yash ‘fed up’ with staying indoors and want to leave the house (not literally). The twins can be seen waving goodbye to their papa and walking away with their suitcases. “Ok we are taking a seasons break on #lockdownwiththejohars! Will resume with season 2 very soon! Love you all and stay safe," the post's caption read. Karan Johar's Kids Yash and Roohi Throw A 'Stupid' Shade On Dadda's Sunglasses Game (Watch Video).

Ok we are taking a seasons break on #lockdownwiththejohars ! Will resume with season 2 very soon! Love you all and stay safe ❤️❤️❤️

Well, a break is fine, but we hope that season two of #LockdownWithTheJohars comes soon. As fans as well as we love to see a peek-a-boo of Yash and Roohi everyday. On the same note, we totally get what Yash and Roohi might be going through amid the lockdown and why they desire to leave their abode ASAP. It really gets boring inside. Stay tuned!

(The above story first appeared on LatestLY on Apr 13, 2020 03:45 PM IST. For more news and updates on politics, world, sports, entertainment and lifestyle, log on to our website latestly.com).