Karan Johar's kids are back, but this time they are all mischievous and they put up his 'sex and magic' on display. Check it out! 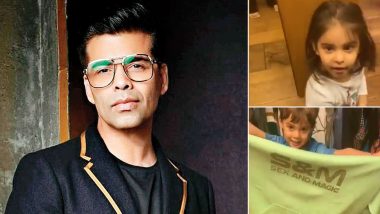 It was a few days ago when Karan Johar was back with the second season of Lockdown With The Johars. Indeed, the filmmaker's kids are smart as well funny and their videos are quite hilarious. Not just KJo's industry friends but his fans are also loving these clips he uploads featuring kids, Yash and Roohi. And well, Thursday was no different as Karan again teased fans with a video and we see the director getting extremely embarrassed in the same. Why you may ask? As it has to do something with Karan's 'sex and magic'. Don't get us wrong, read on. Karan Johar Shares a Hilarious Conversation of Yash and Roohi Spotting 'Shah Rukh Khan' in His Closet (Watch Video).

In the shared video on his IG story, we can see Karan filming his kiddos as the two can be seen goofing around in his closest. However, while Roohi seems decent this time, Yash displays KJo's neon hoodie which has 'Sex and Magic' written on it. When the said thing occurs, we see Karan saying that he is super embarrassed. He can be heard saying, "Yash, why are you holding this? Oh god, am so embarrassed." Karan Johar's Kids Yash and Roohi Throw A 'Stupid' Shade On Dadda's Sunglasses Game (Watch Video).

Check Out Karan's Kids Yash and Roohi's Video Below:

Earlier to this video, Karan had put up a clip of his children singing and confirmed that this talent is not in the genes. He had captioned the post as "Clearly singing is not in our genes! Apologies in advance! #lockdownwiththejohars #toodles." Well, this series with the Johars is indeed fun as right from fashion critic to turning into diet police, Yash and Roohi are fun. Stay tuned!

(The above story first appeared on LatestLY on Apr 23, 2020 05:10 PM IST. For more news and updates on politics, world, sports, entertainment and lifestyle, log on to our website latestly.com).