Laal Singh Chaddha: Aamir Khan Gets Mobbed By Fans In Turkey Who Broke Social Distancing Norms To Click Pictures With the Actor 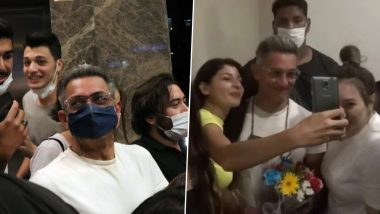 Looks like the Coronavirus pandemic and the need for social distancing to avoid catching the virus, social distancing, was all forgotten by Aamir Khan fans in Turkey. The actor who flew to Turkey to resume shooting for his next film, Laal Singh Chaddha, was mobbed by fans who forgot social distancing to catch a glimpse of the star and also to get pictures clicked. And obviously, once they got close, they even pulled down their masks while clicking selfies- a strict NO NO. Laal Singh Chaddha: Aamir Khan and Kareena Kapoor Khan Starrer To Release In Cinemas On Christmas 2021 (View Tweet).

Only this morning, we had reported that Aamir had flown down to Turkey to resume shooting for the film. Set for a Christmas 2020 release, the COVID-19 pandemic forced the film further and given it involves tonnes of VFX work, the film will reportedly release in Christmas 2021. Laal Singh Chaddha: Mona Singh Reveals How Aamir Khan Didn’t Want To Put The Team At Risk And Complete The Film’s Shoot.

We See Masks But No Social Distancing:

The delay in the release also is because Laal Singh Chaddha will be a huge movie and makers are in no rush to release their film digitally like other of its counterparts. A source had told Mid-day, "Besides presenting Aamir as a 20-something who grows older as the narrative progresses, the film will also depict events like the Babri Masjid demolition and the Kargil war. It won't be easy to complete such intricate VFX work in a short time." Well, we hope a similar mobbing situation does not occur any further, given how dangerous the COVID-19 pandemic has proven to be. An official remake of Tom Hanks' Forrest Gump, Laal Singh Chaddha was one of the most awaited releases of 2020.

(The above story first appeared on LatestLY on Aug 10, 2020 10:49 PM IST. For more news and updates on politics, world, sports, entertainment and lifestyle, log on to our website latestly.com).