Laal Singh Chaddha is all set to hit cinemas next year in Christmas. Earlier to this, the movie was supposed to be out this year, but due to the pandemic, things went haywire. Read on. 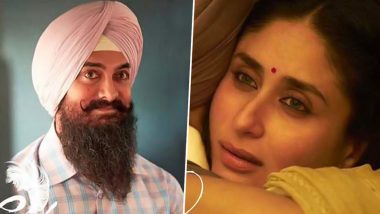 It was a while back when a few pictures of Aamir Khan straight from the airport had made it online. With this, a few reports claimed that the perfectionist star of Bollywood has flown to Turkey to resume shooting of his upcoming release, Laal Singh Chaddha. And now, there's a brand new update revolving around the same flick. Well, Laal Singh Chaddha is all set to hit cinemas next year in Christmas. Earlier to this, the movie was supposed to be out this year, but due to the pandemic, things went haywire. Aamir Khan and Kareena Kapoor Khan’s Laal Singh Chaddha to Miss Its Christmas Release? (Read Details).

We are sure fans of Aamir Khan will be the most elated ones to know about this news. This also makes it clear that the makers are in no hurry to release the film on the OTT platform. "Besides presenting Aamir as a 20-something who grows older as the narrative progresses, the film will also depict events like the Babri Masjid demolition and the Kargil war. It won't be easy to complete such intricate VFX work in a short time," earlier a quote in Mid-day read. Laal Singh Chaddha: Aamir Khan, Kareena Kapoor Shoot for a Romantic Song, Director Advait Chandan Didn't Want To Call Cut Awestruck By Their Chemistry.

The film will now release in cinemas on #Christmas2021. Starring @aamir_khan & #KareenaKapoorKhan in lead along with #MonaSingh.

Helmed by Advait Chandan, Laal Singh Chaddha is the official Hindi remake of Tom Hanks' popular film Forrest Gump. It was in 2019 on his birthday when Aamir Khan had announced this film as a treat to his fans. Laal Singh Chaddha will also see Vijay Sethupathi and Mona Singh in pivotal roles. Stay tuned!

(The above story first appeared on LatestLY on Aug 10, 2020 12:35 PM IST. For more news and updates on politics, world, sports, entertainment and lifestyle, log on to our website latestly.com).