The controversial Tanishq ad had left the social media divided over the idea of communal harmony shown in the promo. Now it looks like even Akshay Kumar's Laxmmi Bomb is facing the same heat, as some of the Tweeple are accusing it of promoting love jihad. 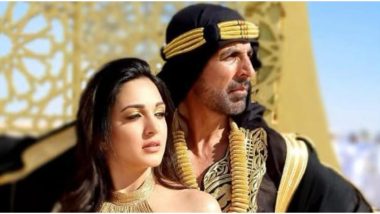 The controversial Tanishq ad had left the social media divided over the idea of communal harmony shown in the promo. Certain (bigoted) sections of Twitterati accused the ad of promoting 'love jihad' by showing a Hindu girl already married to a Muslim boy. Which isn't true, as the ad was more about communal harmony. Now it looks like even Akshay Kumar's Laxmmi Bomb is facing the same heat, as some of the Tweeple are accusing it of promoting love jihad and trending #BoycottLaxmmiBomb. Akshay Kumar's Laxmmi Bomb Trailer Records 70 Million Views In 24 Hours; Becomes The Most Watched Trailer In India.

What got their goat is that Akshay Kumar's character is named Asif, which is a Muslim-sounding name, who is married to Kiara Advani's character. While I didn't catch her name in the trailer. some Twitter users say that her name is Priya, which makes the marriage of that of inter-faith, which for them, means 'love jihad'. Some are also wondering that while Akshay's character's name was changed from Raghav (in the original Tamil film Kanchana, played by directed Raghavendra Lawrence) to Asif in the remake.

Watch the Trailer of Laxmmi Bomb below:

That's it, just that Akshay's name was Asif triggered the Hindu sentiments of some of the trolls who began to slam the film on Twitter. Some also have issue with the film named Laxmmi Bomb, which they think, insults Goddess Laxmi. Apparently, they are fine with crackers that are named so, which inspired the title. For the uninitiated, Laxmmi in the movie is the name of the spirit that gets hold of Akshay's character, hence the movie name.

Why they r promoting

Why The Name of Lead Was Changed?

In #LaxmmiBomb name of the lead actor is Asif and actress name is Priya Yadav. #LoveJihaad

What culture they're promoting? We Ask You That!

Is it true ? Then what is going on

Why they r promoting

Akshay Kumar's name has already been dragged in the Sushant Singh Rajput controversy by the trolls, though there has been no established connection anywhere. His Cape of Good Films was one of the production companies to file a suit against Times Now and Republic against their slander of Bollywood, earning him more ire from the RW trolls. Production Houses Led by Akshay Kumar, Salman Khan, Shah Rukh Khan, Ajay Devgn, Karan Johar and 29 Others File Suit in Delhi HC Against Top Media Houses for Slandering Bollywood.

Meanwhile, Laxmmi Bomb is headed for a Disney+ Hotstar release during Diwali. The horror-comedy could also see a simultaneous theatrical release in certain cities, as per certain reports.

(The above story first appeared on LatestLY on Oct 14, 2020 09:46 PM IST. For more news and updates on politics, world, sports, entertainment and lifestyle, log on to our website latestly.com).