Akshay Kumars Laxmmi Bomb trailer is the most-watched one in India and all that happened in just 24 hours. Earlier, Disney+Hotstar had disabled the Likes and Dislikes button on the Youtube video. 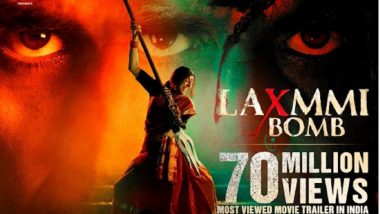 Akshay Kumar's Laxmmi Bomb trailer hit the internet yesterday and soon enough became the most viewed trailer. It was as if people were waiting to see how Akshay Kumar as transgender and when it did arrive, the internet exploded. The trailer has made a record. It has clocked 70 million views in 24 hours on all digital platforms. It has become the most-watched trailer in India as well. This means when the movie releases this Diwali, there will be people who will watch it for sure. Akshay Kumar In Laxmmi Bomb Or Ashutosh Rana In Sangharsh: Who Did This Scene Better? Vote Now

Disney+Hotstar has also taken steps to make sure the trailer only spreads the good word. We told you how they have disabled both the likes and dislikes button on Youtube to keep hate away. Sadak 2 had paid the price when the trailer had released. It became the most disliked trailer. The once bitten twice shy nature of the streamer has paid off heavily because even when you want to dislike it, you have to go to the page and view it.

#LaxmmiBombTrailer sets record, brings in 70M views in just 24 hrs on all digital platforms. Becomes most viewed trailer in India in 24 hrs.

Many Youtube users were disgruntled that the buttons were off but it did pay off.

(The above story first appeared on LatestLY on Oct 10, 2020 02:59 PM IST. For more news and updates on politics, world, sports, entertainment and lifestyle, log on to our website latestly.com).