Mike Tyson in Liger: Did You Know the Boxing Legend Had Already Made His Bollywood ‘Debut’ in a Sunny Deol and Shahid Kapoor-Starrer? (Watch Video)

Liger is written and directed by Puri Jagannadh and jointly produced by Karan Johar and Charmme Kaur. Liger is Vijay Deverakonda's Bollywood debut, and Ananya Panday is the female lead. 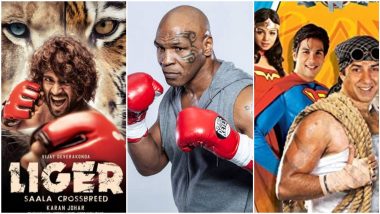 Not Liger, Mike Tyson Had Already Made His Bollywood Debut in a 2007 Film! (Photo Credit: Twitter)

In a major announcement, it was revealed that Dharma Productions' bilingual Liger will see the former boxing heavyweight champion Mike Tyson in an important role. Liger is Vijay Deverakonda's Bollywood debut, though the film will also be shot in Telugu. Ananya Panday is the female lead, while popular Telugu filmmaker Puri Jagannadh is directing. Along with Karan Johar, actress Charmme Kaur is also the producer of Liger. Liger: Mike Tyson To Feature in Vijay Deverakonda, Ananya Panday’s Film.

While Mike Tyson's role in Liger isn't clarified, it is said to be quite an important one. Since the movie is set against the backdrop of boxing, we expect Tyson to act as a mentor to Vijay's character in the film.

The teaser that accompanies this announcement, also says that this is the first time Tyson is appearing on the Indian screens...

... which isn't exactly true. For the boxing legend had already graced a Bollywood film once!

Mike Tyson had been brought in a for a promotional song appearance which was shown during the end-credits of the film. The sequence sees him boxing alone in the ring. Jamie Foxx’s Mike Tyson Biopic Is Moving Forward as a Limited Series.

Tyson had shot for the film, despite going through some legal issues at the time. The legend is also known for playing himself in some popular movies and series like The Hangover and its sequel, Entourage, IP Man 3, How I Met Your Mother among others.

(The above story first appeared on LatestLY on Sep 27, 2021 04:44 PM IST. For more news and updates on politics, world, sports, entertainment and lifestyle, log on to our website latestly.com).