Actress Mrunal Thakur feels that very few filmmakers give equal footing to women characters in their movies. According to her, Rakeysh Omprakash Mehra is one of those filmmakers who treats female characters in fheir films well. 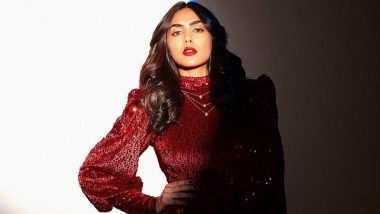 Actress Mrunal Thakur feels that very few filmmakers give equal footing to women characters in their movies. According to her, Rakeysh Omprakash Mehra is one of those filmmakers who treats female characters in fheir films well. "There are very few filmmakers who envision a story that gives its women characters an equal footing. In the best of Rakeysh's works, one can see how beautifully he layers his women. Be it Soha Ali Khan's Sonia in 'Rang De Basanti' or the female characters in 'Delhi 6' or 'Bhaag Milkha Bhaag', his women are memorable," said Mrunal. Pippa: Mrunal Thakur and Priyanshu Painyuli Join Ishaan Khatter in a War Drama Helmed by Raja Krishna Menon!

She will be seen in Mehra's next film "Toofan" alongside Farhan Akhtar. "In 'Toofan' my character is an anchor to the narrative despite not being the driving force of the plot. It was a beautiful experience working with Farhan and Rakeysh. They subconsciously help you push yourself to explore things you haven't tried. The little nuances they bring to their work teaches you so much," she said. Mrunal Thakur Is the Millennial Style Icon for Wedding Vows Magazine This Month!

"I have learnt so much from 'Toofan', most importantly (the fact) that women in new-age narratives aren't ornamental. They have a solid ground to stand on and the male actors like Farhan facilitate that," said Mrunal. About Mehra, she felt he is a filmmaker who tells "stories of interest and his characters are well fleshed out and nuanced, who stay in your heart even after the film is long over."

(The above story first appeared on LatestLY on Nov 23, 2020 12:41 PM IST. For more news and updates on politics, world, sports, entertainment and lifestyle, log on to our website latestly.com).