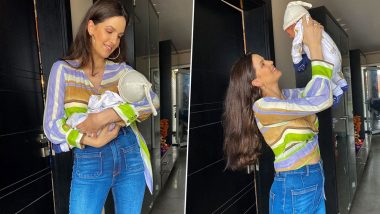 Actress Natasa Stankovic and husband, Indian cricketer Hardik Pandya welcomed their blessing, a lovely boy on July 30 and both the parents couldn't stop gushing over their bundle of joy, nor could we. Both Hardik and Natasa have shared multiple glimpses of their baby boy on social media and the baby has been hogging all the media limelight since his arrival a few days ago. And now, new mommy Natasa Stankovic shared two pictures holding her kid and we are gushing over the Maa-Beta Jodi already. Hardik Pandya and Nataša Stanković Blessed With Baby Boy, Indian All-Rounder Tweets First Pic of Newborn Son!.

Natasa, who seems to have already lost her pregnancy weight and looked her glowing self, captioned the image, "When I hold you, life makes sense. ❤️❤️❤️🤱🏻 #mamasboy #blessings". Hardik Pandya & Natasa Stankovic’s Baby Boy Named Agastya? At Least That’s What The Pictures Suggest.

When I hold you, life makes sense. ❤️❤️❤️🤱🏻 #mamasboy #blessings

Natasa and Hardik got engaged on January 1, 2020, and soon after, in March announced the news of Natasa's pregnancy. In fact, in a host of pictures that both of them posted, Natasa and Hardik also revealed that they were married. And as per photos of a cake that the hospital got for the new parents, it was decorated with 'Welcome Pandya Jr Agastya', giving rise to speculation that that was indeed the boy's name. However, there has been no official revelation on behalf of the Pandya family about their grandson/munchkin's name.

(The above story first appeared on LatestLY on Aug 12, 2020 11:37 PM IST. For more news and updates on politics, world, sports, entertainment and lifestyle, log on to our website latestly.com).