No Salman Khan Film Arriving on Eid This Year; Actor Says Will Release His Next on Diwali or Christmas

Bollywood superstar Salman Khan revealed on Monday that he will release his next film on either Diwali or Christmas this year. 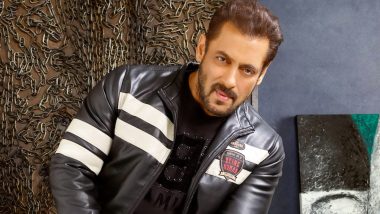 Bollywood superstar Salman Khan revealed on Monday that he will release his next film on either Diwali or Christmas this year. He did not divulge the details of the film's title, story or genre, but going by his announced projects in the pipeline, the film seems to be most likely 'Tiger 3', the third installment of the hit spy franchise. Speaking on the sidelines of a media event to promote the International Indian Film Academy Awards (IIFA), Salman said: "This time around I'm taking a break during Eid. Instead, Ajay Devgn will be coming up with his film 'Runway 34'. I would like all of you to show as much love for his film on Eid as you shower on mine." MS Dhoni Plays Vintage Knock, Wasim Jaffer Reacts With a Meme from Salman Khan’s Sultan Movie.

Salman Khan will host IIFA, which will be held at Yas Island in Abu Dhabi on May 20-21, along with Riteish Deshmukh and comedian-TV presenter Manish Paul. When asked if he would ever switch over to OTT, he gave a rather quirky reply: "Yes, I will come on the medium of OTT, but as a producer. There are a few projects that we are in talks for." Salman Khan Takes a Dip in the Pond, Treats Fans With His Shirtless Photos.

For him, cinemas have to be larger than life and the reason why films from the south are doing so well across India is their single point focus on heroism. Salman said: "Films with heroism are a dying art in Bollywood. Today, Bollywood has moved away from films that were high on heroism. Sadly, heroism is not in vogue these days in Bollywood. Sad, because the mark of Bollywood has always been heroism, there's an emotional connect with the hero of the film."

He continued: "What started with Salim-Javed (screenwriter duo Salim Khan, Salman's father, and Javed Akhtar) as a format for heroes, finds its way even today in the films from the south. They have cracked the code. It remains to be seen if we (Hindi films) would ever get to that space again as an industry."

In conclusion, Salman said: "I have always worked in that line of cinema because that is something I believe in. Another thing, South Indian writers are very hardworking, they know the pulse of the audience. Films have gone pan India, so I would like to see directors from the south pick up scripts from Bollywood to make in their own territory, and vice-versa. That is when we'll have a surfeit of quality content."

(The above story first appeared on LatestLY on Mar 28, 2022 09:50 PM IST. For more news and updates on politics, world, sports, entertainment and lifestyle, log on to our website latestly.com).