The new teaser dropped by the makers is just like the previous ones, creepy and frightening! 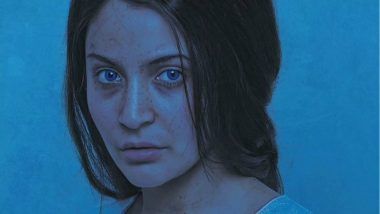 Anushka Sharma is on a spree of scaring the hell out of people through her upcoming film 'Pari'. The not-so-fairy tale like looking movie has created a strong buzz in the industry with Anushka's never- seen- before horror avatar. The actress won the hearts with her 'friendly ghost' appearance in 'Phillauri' but there is nothing friendly about her in this Prosit Roy directorial. The new teaser dropped by the makers is just like the previous ones, creepy and frightening!

Anushka Sharma is seen sitting at the edge of a veranda with wind blowing furiously around her. Then comes a moment when we get to see her face and her blood-shot eyes and wicked expressions will send chills down your spine. Check out this appalling video right here!

Earlier, talking to TOI about her beliefs about 'ghosts', she said, " I believe in conspiracy theories and yes, I do believe that ghosts also exist. I was having this conversation with Rajkumar Hirani trying to tell him this, and he was like, "No, they don't exist". I went on talking about frequencies and how beyond a certain frequency, there must be something. Of course, I was afraid of ghosts! If I am afraid, that means I believe it, right?"

'Pari' is made under Anushka Sharma and Karnesh Sharma's home banner 'Clean Slate Films'. After two unique films like 'NH10' and 'Phillauri' under the same banner, we will get this fresh story to watch by the Sultan actress' side. On the other front, she will be also seen in Aanand L Rai directorial starring 'Zero' starring Shah Rukh Khan, Katrina Kaif. One more film that has been lined up for the actor-turned- producer is 'Sui Dhaaga' with Varun Dhawan.

(The above story first appeared on LatestLY on Feb 19, 2018 02:29 PM IST. For more news and updates on politics, world, sports, entertainment and lifestyle, log on to our website latestly.com).