Pathan: Before Doing Cameo For Free, 5 Times Salman Khan Showed His ‘Bhaichara’ Towards Shah Rukh Khan in the Past!

Salman refused to take any remuneration for his work because Shah Rukh is like his brother and for him, he is ready to do the film for free. The makers however decided to send in an expensive gift to Salman as a gesture for being a part of the film. 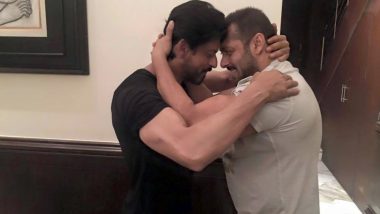 Salman Khan and Shah Rukh Khan have been the best of friends for the longest time now. The two share a great camaraderie, both on-screen and off-screen, and are often seen helping each other whenever needed. The actors will be reuniting for Pathan where Salman will have a cameo role. The actor shot for his scenes in February and was said to be charging a hefty amount for his role. Pathan: Salman Khan Confirms His Cameo In Shah Rukh Khan’s Film On Bigg Boss 14.

But contrary to the earlier reports, it is now being said that Salman will not be taking any fee for his role in the SRK starrer film. According to reports in Bollywood Hungama, Salman refused to take any remuneration for his work because Shah Rukh is like his brother and for him, he is ready to do the film for free. The makers however decided to send in an expensive gift to Salman as a gesture for being a part of the film.

Interestingly, this is not the first time Salman has helped Shah Rukh or done a grand gesture for him. Check out our list of moments when the actor helped SRK before this:

When Salman Gifted A Customised Bicycle To SRK's Son AbRam

Salman Khan often takes his bicycle out for a ride and since he lives very close to Shah Rukh's house, one day he went to see him. While at SRK's he noticed how little AbRam has his eye on Salman's bike. He realised how he liked hi bicycle and got a customised cycle made for the little one. The bike continues to remain the most prized possession of Abram to date.

When Salman Dedicated His Award to SRK

Salman is very emotional when it comes to people that he is close to. Back in 1999, when Salman received the Filmfare award for best actor in supporting role for Kuch Kuch Hota Hai, he thanked SRK for it. He had said, "Thank you Shah Rukh for supporting me in the film. I hope you continue to support me for the rest of my life. He’s an amazing human being.”

Salman appeared in a cameo in SRK's Zero but made sure he promotes the film with full zest. He opted for a very unique way to spread out the word. Salman Khan once stopped his car and invited some of SRK's fans over to his house. The actor treated them to a meal and asked them to promote the movie. Fans of Salman Khan and Shah Rukh Khan Engage in Twitter War as to Who is the Bigger National Hero.

While Salman and Shah Ruk Khan were not in touch with each other during this time. Salman defended him when Bigg Boss 6 contestant Imam Siddique insulted SRK. Imam said that he had cast SRK for ad films that worked very well for him and were the reason behind his success. Replying to this, Salman had said, "Shah Rukh is in the industry because of his hard work and support of his fans... not because Imam cast him in an advertisement.”

When Salman Welcomed SRK On His Game Show

Salman Khan invited SRK on his reality show Dus Ka Dum. Bhai made sure he makes SRK's entry epic and pushed Shah Rukh on a cart to welcome him on the sets. This gesture was absolutely sweet and people were in awe of their camaraderie.

Talking about Pathan, The film also stars Deepika Padukone and John Abraham in key roles. SRK has flown to Dubai last month to shoot for the film. Salman has also wrapped up the shoot for his part in the film. Deepika is yet to wrap up her part in the YRF backed film.

(The above story first appeared on LatestLY on Apr 15, 2021 09:08 PM IST. For more news and updates on politics, world, sports, entertainment and lifestyle, log on to our website latestly.com).