Their relationship is going from strength to strength, and we could not be more happy. 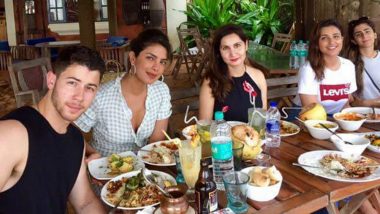 Just when we had started missing the hottest couple in town, they make a dashing appearance. We are talking about Priyanka Chopra and Nick Jonas, the sexy pair who is in Goa for a family vacation...psst…vacationing with PeeCee’s family. The 35-year-old Bollywood actress and her 25-year-old American singer-songwriter boyfriend are also joined in by Priyanka’s cousin and actress Parineeti Chopra on Goa holidays among other family members and close friends. The inside pictures and videos of Priyanka’s intimate family affair showcase the pleasant time she is having back on her home soil. From dancing in the rains to enjoying scrumptious breakfast, PC’s gang is having a blast in Goa. Priyanka and Parineeti Chopra Dance Video on Sexy 'Tip Tip Barsa Pani' Song to Welcome Monsoons is Fun, But Where is Nick Jonas?

A fan page dedicated to the Quantico actress, pcourheartbeat on Instagram shared a couple of pics of the group having breakfast. In the first photo, the lovebirds aka Priyanka and Nick are sitting next to each other while Parineeti is also comfortably seated. The Namaste England actress is all smiles joining in her elder cousin and her partner for the trip. Priyanka Chopra and Nick Jonas Age Difference Is on Everyone's Mind! How Old is Sexy Bharat Actress and Her Rumoured Boyfriend?

priyanka with her friends, family and fans in GOA. #priyankachopra #parineetichopra #nickjonas

Earlier, Priyanka and Parineeti indulged in some singing and dancing on Raveena Tandon and Akshay Kumar's famous song, "Tip Tip Barsa Pani" from the movie Mohra.

Ever since the couple have arrived in India (on June 22), every move of theirs is closely followed by anticipated paparazzi and of course, pair’s die-hard fans. After reaching Mumbai, Priyanka and Nick headed straight to the Bollywood actress’ lavish Juhu residence. Later, the two got all decked up for their late-night date and most importantly, Nick’s introduction to Priyanka’s mother, Dr Madhu Chopra. They later had a house party with Priyanka’s brother Siddharth Chopra, Parineeti and actress Alia Bhatt. Post the fantastic party at her residence, they took off again for a private family holiday in Goa.

We are absolutely loving the fact that Priyanka’s boyfriend is such a sweetheart as he is so keen on meeting and knowing his ladylove’s family and friends. We had seen Priyanka do the same when she was invited by Nick to his cousin Rachel Tamburelli's wedding held in Atlantic City, New Jersey. She had also met Nick’s family and friends and gelled quite well with them (she is already following Nick Jonas’ father Paul Kevin Jonas Sr on Instagram)! Their relationship is going from strength to strength, and we could not be more happy.

(The above story first appeared on LatestLY on Jun 25, 2018 11:41 PM IST. For more news and updates on politics, world, sports, entertainment and lifestyle, log on to our website latestly.com).