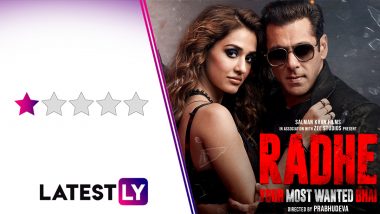 Radhe Movie Review: Dear Bhai fans. I know it is very much of a cliche to write Salman Khan's new release is purely for you, every time I have to write a review. Like the people in this country deserve better governance, I also expect you guys to get better movies from your favourite superstar, instead of you cheering every absurdity that Salman gives you in the name of entertainment. Unfortunately, even his new release Radhe: Your Most Wanted Bhai is also falling in the same category - all noise, all futile exercise of fan-worship! Watch Radhe Online: Here’s How You Can Watch Salman Khan-Disha Patani’s Film on ZEEPlex From the Comfort of Your Home!

Honestly speaking dudes, The Outlaws, the 2017 Korean movie on which Radhe is based on, was perfect for Salman Khan. When I had watched the original a couple of years back, the lead character of Don Lee's Ma Seok-do reminded me a lot of Salman Khan in his swagger and his coolth. I was sure Bhai would rock the role if he got to do the remake. All director Prabhu Deva had to ensure is do proper justice to the original and recreate it fittingly into Bollywood milieu. He even gets a fine actor like Randeep Hooda to play its terrifying antagonist.

I have not forgotten how Prabhu Deva had given Salman a very much needed hit in Wanted, this movie's unofficial predecessor, in 2008, when Bhai was having a spate of flops. Disregarding the fact that he also made the worst Dabangg movie (and that's saying a lot), I hoped (in a country that never should have hope) that they would somehow manage to work out a success formula here.

Alas, the trailer and the terrible "Seeti Maar" song remake were hints enough that it was not meant to be. Imagine the only talking point of a whole trailer being if Salman Khan had kissed Disha Patani on the lips or on a duct tape. There is nothing else to talk, nothing else. Unless you want to talk how hot Disha Patani is in Radhe. Sorry, if my previous line sounds sexist, but that's her whole existence and purpose in the movie (the original never had a female love interest for the hero).

Say what? You are still curious to know what Radhe is about? Well, here you go. A trio of vicious gangsters come to Mumbai and become leaders in drug trade. The group is led by Rana (Randeep Hooda) whose brutality in dealing with his enemies make him a fearsome figure in both the police force and the opposing gangsters.

As more and more school and college kids become prey to drugs, the cops bring in the man who can put an end to it all. Enters Radhe (Salman Khan), who is tasked to head the anti-narcotics team. His senior Avinash Abhyankar (Jackie Shroff) doesn't like him much, even more so when Radhe starts dating his model sister Diya (Disha Patani). How Your Most Wanted Bhaiyya eradicates the drug menace, but not before gratuitously showing off his bronzed abs and romancing a girl more than half his age, is what the rest of the movie is all about.

Funnily, the runtime of The Outlaws is about 121 minutes and Radhe is seven minutes shorter. Still Prabhu Deva has managed to put in a romantic track (that is fishily similar to Aamir Khan-Asin's meet-cute romance in Ghajini, before it went all violent) and four songs for Bhai to shake his hips to. Why, the movie adds a song just after a group of men are brutally killed and the heroine is nearly assaulted! Radhe: Before This Salman Khan-Starrer, 7 Times Randeep Hooda Impressed Us in Roles of Grey Shades!

But then the Korean movie's premise is merely just for Radhe to have an excuse of a plot. The whole movie is about Salman Khan reigning over every scene, even in those where his character is not needed at all. He even becomes a landing cushion for a boy thrown from a multi-storeyed building! Nearly every character end up worshipping him (save for Avinash and the villains), and if you think it was just his role and not the star, then the movie brushes off your defense as shoddily as it does to logic. From Salman looking at the camera to wish Eid to his fans to a visual of his real-life residence Galaxy apartment to the awkward name-dropping of the reality show that he hosts, this is Salman veneration at its best. Or worst. You can pick what you think.

Of course, it is understandable that Radhe would be tone-deaf enough to ignore the political correctness of the original. In The Outlaws, the lead doesn't kill a single baddie, here the film reveres Radhe for carrying out 97 extra-judicial killings. In the original, there is a scene where after his subordinate fears for his life in a near-fatal attack, the lead empathises with his situation and tries to guide him in the most sensible way possible. In Radhe, when Megha Akash's character has a similar conscience crisis, the hero merely asks her to shrug it off, saying he is in the service despite being scared of cockroaches! In fact, Radhe couldn't even live up to its own political correctness. We have the heroine reduced to a glam doll, who needs rescuing, and a perfectory item song featuring Jacqueline Fernandez in a movie where the hero claims he is fighting for womanhood.

Okay, I give up. No more comparisons. Let's talk about Radhe's more memorable portions. Remember how Salman 'Hulk'ed out in the thrilling climactic fight sequence in Dabangg? In Radhe, he becomes The Flash in his intro scene as he takes on a gang of Parvesh Rana's sleazy businessman. It is another matter that Bhai never uses this skill later in the movie.

Or let's talk about the excruciatingly silly climax where bikes, helicopter, logic, VFX and Randeep Hooda's body all go for a toss. You came for all these silliness? Radhe will make sure you have a gala time!

Should I even talk about the performances? Theek hai, I can rant a bit more. Let me admit, Salman Khan looks absolutely fit in the role, though he just can't run. There have been much efforts to make him look younger and agile in the action sequences and songs, that I think they ignored everything else. Salman's performance, however, is more restricted to him glaring and smarming.

Disha Patani sizzles more than a steak served at Kobe Sizzlers. That's about it.

Randeep Hooda could have been a great villain here, only if Radhe bothered to give him an opportunity to be so. Instead of just making him a ragdoll for Bhai to throw around in the climax. Pray, what is Jackie Shroff doing here? He is amusing in a couple of scenes, but it was terrible to see the actor dancing around in a one-piece! Tamil actors Bharath and Megha Akash leave no impact. The rest of the supporting cast competes in the hamming department.

You want to know if Radhe totally sucks? Well, the action scenes are somewhat okay - the one-take scene where Rana kills off a competitor at latter's party function is nicely done. The movie has also been glammed up to be visually appealing. Yes, that's about it!

I want to say Radhe: Your Most Wanted Bhai will make Salman Khan fans happy. I really do. But you people deserve better. Salman Khan can do better, seriously. Just Radhe is not that movie. In choosing between Race 3 and Radhe as which is Bhai's worst movie is more like a Sophie's Choice for me. Radhe: Your Most Wanted Bhai has released in select theatres overseas and is streaming in India on ZeePlex.

(The above story first appeared on LatestLY on May 13, 2021 03:26 PM IST. For more news and updates on politics, world, sports, entertainment and lifestyle, log on to our website latestly.com).