Watch Radhe Online: Here’s How You Can Watch Salman Khan-Disha Patani’s Film on ZEEPlex From the Comfort of Your Home!

Apart from the theatres, Salman Khan and Disha Patani's film Radhe is also releasing on the OTT platforms. And in case, you are scared to go to the cinema halls in these COVID-19 times, here's your way to watch the movie online. 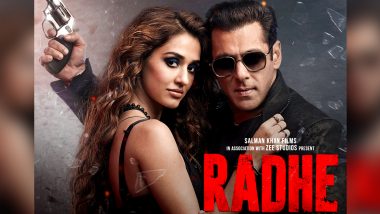 Salman Khan and Disha Patani's Radhe have released worldwide on Eid 2021 i.e May 13. Owing to the COVID-19 crisis, the makers have gone the hybrid release way wherein Radhe: Your Most Wanted Bhai has released in theatres as well as OTT platforms. This Salman's film is out during times when India is not in a great state due to the coronavirus. Fans of Bhaijaan are elated that finally, the film has seen the light of the day, which was due to release on Eid last year. But still, many fans are confused about where and how to watch the movie considering many theatres are shut due to the lockdown. Radhe: Salman Khan-Disha Patani’s Film Releases on Eid; Dubai Cinema Halls See Grand Welcome and Long Queues (Watch Videos).

The best thing to note here is that Radhe can be watched at the ease of your home and cinema halls are not the only option. Keeping in mind the health and safety of his fans, the makers have released the movie on digital platforms too. And here's your guide on how to watch Salman's Radhe from the comfort of the home. Radhe Full Movie in HD Leaked on TamilRockers & Telegram Channels for Free Download and Watch Online; Salman Khan - Disha Patani’s Film Is the Latest Victim of Piracy?

How To Watch Radhe From Home?

For the ones interested the movie can be watched on ZEE5 with ZEE’s pay-per-view service, ZEEPlex. And for the ones using DTH platforms like Dish, D2H, Tata Sky, and Airtel Digital can also avail the service of ZEEPlex at a price of Rs 249.

There is a special one-year offer to watch Radhe, available at an attractive price of Rs 499/-, which will give viewers the opportunity to watch the much-awaited film of 2021 on ZEE5 with ZEEPlex starting May 13, in addition to giving the audience access to ZEE5’s extensive and diverse premium content library.

Meanwhile, as per early reviews by fans on Twitter, Salman's Radhe has garnered mixed responses. Apart from the leads, the flick also stars Randeep Hooda and Jackie Shroff in pivotal roles. Helmed by Prabhu Deva, the film is presented by Salman Khan Films in association with ZEE Studios, produced By Salma Khan, Sohail Khan, and Reel Life Production Private Limited.

(The above story first appeared on LatestLY on May 13, 2021 02:35 PM IST. For more news and updates on politics, world, sports, entertainment and lifestyle, log on to our website latestly.com).