Raj Kundra's 2013 Book Titled 'How Not To Make Money' Resurfaces On Twitter Amid Pornography Case; Here's All You Need To Know About It

Twitter users dug up a tweet of Raj Kundra from 2013 where he is promoting his book 'How Not To Make Money' which is apparently based on a true story. Here's everything you need to know about the book. 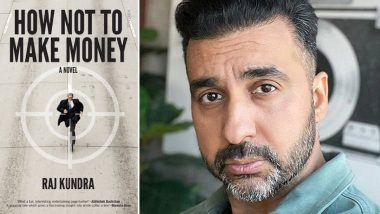 Raj Kundra, How To Not Make Money (Photo credit: Twitter)

The synopsis on Amazon reads, "When booze smugglers Jai and Mike reconsider their options after another close brush with the law, their friend Aziz, a corporate lawyer comes up with a plan for all of them to rake in even more money with less risk. Setting up an undetectable, foolproof scam, the boys who grew up together in the same London neighborhood are now going to grow rich together and quickly. As with the best-laid plans, they'd not counted on a few bumps along the way in the form of the intrepid fraud investigator who picks up on their trail and Pam, the femme fatale whose sari blouses leave less to the imagination than bikinis, who has her eye set firmly on Jai. Knowing you have to risk it big to make it big, the boys put everything on the line in this high-speed thrill ride of a novel. But will they come out laughing or are they walking into a trap?"

Raj Kundra's debut novel was published Random House India and is 558 pages long. On Amazon, the book has received 3.5 ratings out of 5 which means it's a decent read. Raj had tweeted back then how it took him four years to write the book.

Speaking to Bangalore Mirror, Kundra had said, "A lot of people including me were affected by the Missing Trade in the UK and Europe in early 2000. The scamsters used to give so much competition we couldn’t beat it. They evaded VAT and sold products at really cheap prices. Like in the book, it wasn’t just three people, there were probably between 2,000 to 3,000 of them. I picked three of them to tell their stories from rags to riches and so that the layman understands how scams happen." He also mentioned that he had to slow down once he met Shilpa Shetty as he wanted to give her time. Raj Kundra’s Brother-in Law Involved in Hotshot App: Shilpa Shetty Tells Mumbai Police

In the same interview, Kundra had mentioned his desire to write a sequel to the book and even had a skeletal structure of the same.

Well, now all that is fiction, we guess!

(The above story first appeared on LatestLY on Jul 24, 2021 05:45 PM IST. For more news and updates on politics, world, sports, entertainment and lifestyle, log on to our website latestly.com).