Talking about the changes that the film had seen, the film which was initially scheduled to release in April 2020 was shifted to June 5, 2020 after discussions with Karan Johar. 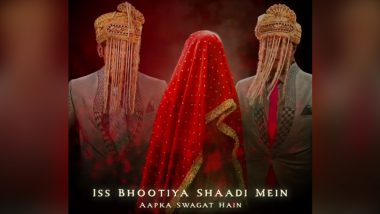 Rajkummar Rao and Janhvi Kapoor's Roohi Afzana might be one of those few movies that has had so many changes from the time it was announced. From the change in the title of the film to the change in its release dates, fans have been waiting to know when the film is finally coming out. Putting an end to all the speculations, at last, Maddock Films has shared some exciting news about the horror film. The team has shared a promo teaser to announce the release date of the film. Janhvi Kapoor and Rajkummar Rao's Roohi-Afzana Gets a New Title and a Release Date, Film Will Now Clash with Kiara Advani's Indoo ki Jawaani on June 5, 2020.

All Rajkummar Rao and Janhvi Kapoor fans can celebrate as the film will finally be making it to the theatres on March 11, 2021. With this, the makers also announced that the film is now titled 'Roohi' instead of 'Roohi Afzana'. The promo video had spooky noises in the background while Janhvi, Rajkummar and Varun Sharma appear later in it. The three have their face covered and are seen dressed in marriage ensembles. The promo prompts a message inviting you to a 'Bhootiya Shaadi', piquing the excitement for the film. The promo also informed that the trailer of the film will be out tomorrow.

During an interaction with Mumbai Mirror, Dinesh Vijan, the producer of Roohi, had spilled a lot beans about the movie. "Roohi Afza, my first film with Janhvi (Kapoor) and my third with Raj, comes in April 2020. In March 2021, we plan to release another horror-comedy, Munjha, which goes on the floors next year in August. All three— Stree, Roohi Afza and Munjha—will have a part 2 which will arrive over the next five years, three years after the original opened, each answering the questions the first part ended with. Then, all three will come together in my horror universe in a series of two films which deal with the bigger picture and a larger conflict," said the producer. Janhvi Kapoor-Rajkummar Rao's Horror Comedy Is Not Titled Rooh Afza! Find Out The New Title Here.

Talking about the changes that the film had seen, the film which was initially scheduled to release in April 2020 was shifted to June 5, 2020 after discussions with Karan Johar. The film was supposed to clash with the release of Kiara Advani's Indoo ki Jawaani and Abhimanyu Dassani's Nikamma scheduled for a release on the same day. The tile also saw alterations as the film was initially announced as 'Roohi-Afza' then changed to 'Roohi Afzana' and now finally is titled Roohi.

(The above story first appeared on LatestLY on Feb 15, 2021 12:00 PM IST. For more news and updates on politics, world, sports, entertainment and lifestyle, log on to our website latestly.com).