Janhvi Kapoor and Rajkummar Rao's Roohi-Afzana Gets a New Title and a Release Date, Film Will Now Clash with Kiara Advani's Indoo ki Jawaani on June 5, 2020 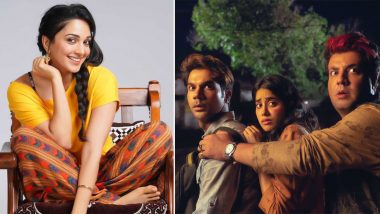 We hate when there's so much fuss about the changes in a film's release date. While Irrfan Khan's Angrezi Medium got preponed, Janhvi Kapoor's Kargil Girl and Roohi-Afza which is now Roohi Afzana got postponed at the same time. The decision was taken after two producers, Karan Johar and Dinesh Vijan decided to exchange their release dates mutually while picking the slots that would benefit them the most. Irrfan's next will now release on March 13, 2020, and Kargil Girl will hit the screens on April 24 and Roohi Afzana on June 5 respectively.

The announcements came in after Karan Johar took to his Twitter account to announce the 'exchange' of dates. Since Janhvi's Roohi Afzana was already scheduled on April 24 and she couldn't clash with her own project, the horror-comedy was then pushed for a June slot. However, it won't be a solo release for the makers as June 5 already has Kiara Advani's Indoo ki Jawaani and Abhimanyu Dassani's Nikamma scheduled for release. With Roohi-Afzana jumping in on the same boat, it's going to be a three-way ride and we wonder who would emerge as the winner of this box office race.

However, considering Kiara and Janhvi are equally closer to Karan Johar, chances are the producer will ask the makers of Advani's next to shift their release date. In that case, it would be a win-win situation for both his favourites. We will wait for the official announcement though!

(The above story first appeared on LatestLY on Feb 17, 2020 02:15 PM IST. For more news and updates on politics, world, sports, entertainment and lifestyle, log on to our website latestly.com).