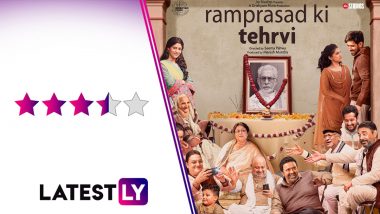 Ramprasad Ki Tehrvi Movie Review: Actress Seema Pahwa turns diretor with this social dramedy that revolves around an extended family dealing with the demise of their patriarch. Titular Ram Prasad (Naseeruddin Shah) passes away after doing the one thing he loves the most - playing the piano. His death brings his children and their respective spouses and the kids, the uncles and the aunts to the house, as they prepare for the 13-day mourning period. Ramprasad Ki Tehrvi: Seema Pahwa’s Directorial Debut Starring Naseeruddin Shah, Supriya Pathak, Konkona Sen Sharma Releases on January 1, 2021.

Through the next 13 days, we see glimpses of their fractured bonding, of their laughs, their sorrows as they deal with the loss of their father. Meanwhile the grieving matriarch (Supriya Pathak) is silently worrying over how none of her kids share the same sorrow that she does, instead they spend time hassling over the traditions, wondering who will repay their father's loan, who will take care of the mother or gossipping about each other. But are they truly not affected by their father's demise?

Interestingly, Ram Prasad Ki Tehrvi comes merely days after Pagglait began streaming on Netflix. Like the Seema Pahwa film, even Pagglait dealt with a family mourning the loss of their love one through the 13-day mourning period. Both the films are set in Uttar Pradesh, have their share of humour and sentiments, filled with good actors and also has this plotline of this house being in a financial crisis.

For the uninitiated, Ram Prasad Ki Tehrvi was made around in 2019, saw its premiere in MAMI 2019, and with its release affected by COVID-19, got delayed and finally came out in theatres on January 2, 2021. Sadly, Ram Prasad Ki Tehrvi's release went under the radar for the general audience, and Pagglait got more attention thanks its exclusive Netflix release.

In my humble opinion, I felt that RPKT is a much better film that Pagglait, in terms of its making, its focus and its impact. And yet I also share the opinion that both the film couldn't take full advantage of the possibilities that their common premise had to offer. Pagglait Movie Review: Sanya Malhotra and Ashutosh Rana’s Performances Make This Netflix Drama a Decent One-Time Watch.

What Ram Prasad Ki Tehrvi does best is how it uses its assorted colourful characters to show how despite how flawed they come across, family members can't be people we just disregard. Each have their loving or their selfish side, that comes out depending on the situation. The bitter-sweet family dynamics between the siblings, their spouses, the other relatives are depicted in a very natural manner, that is heartwarming at best. There are moments of love and care, there are moments of bitter frustration which are even targeted to the parents, one of them being dead. Questions are asked over each other's responsibilities and blame is apportioned accordingly. Gossip dominates in the kitchen, that permeates to the bedrooms. Pahwa has got the connect that the viewer who have lived in extended families would relate the proceedings.

The scene where the brothers recall their childhood song after a night of drinking is nice. And so is the scene where the eldest sibling opens up in anger about what she thinks about the injustice done to her by her parents. Nothing she says is new, and yet it springs like as a surprise to us. A maama (Vineet Kumar) who tries to dominate over the younger members, and even gets them to pour water as he washes his hands after visiting loo, later thanks his wife when she does so. My fave scene is in the climax, when the kids leave the house and it is when the grief hits them the most.

Pahwa doesn't need to go to the extreme to evoke drama from her characters. I thought the movie would do that when Seema (Konkona Sen Sharma), the wife of the youngest sibling Nishant (Parambrata Chattopadhyay) enters the scene. At times, I felt that Seema would dominate the proceedings, which thankfully, doesn't happen much. Through her, RPKT shows the dissonance between the more ambitious members of the family and the subservient ones. The final scene between her and her mother-in-law is very touching, performed so well by both the actresses even without saying anything. It is peculiar that this character shares the first name of the director, while she also is an actress. Do I smell some bit of real-life shading?

It also helps how Seema Pahwa uses the camera (cinematography: Sudip Sengupta) as an unseen stranger in the house. The movie begins through a tracking shot that makes it feel like the camera is walking along the lanes of the town and finally settling itself in Ram Prasad's house. From thereon on there are some striking uses of the tracking shots, the best being the scene where Divya Jagdale's character walks out of the kitchen and goes to the first floor while interacting with several characters on the way. Amazing cinematography on display here. Everything feels like a well-played stage act!

Of course, nothing would have worked if the actors are bad, and Pahwa has brought in a tantalising array of talent to help her out. Naseeruddin Shah, Supriya Pathak, Konkona Sen Sharma, Parambrata, Manoj Pahwa, Vikrant Massey, Vinay Pathak, Sadiya Siddiqui, Rajendra Gupta, Ninad Kamat, Brijendra Kala, Deepika Amin, Divya Jagdale et al. Even an average scene feels like a masterpiece when they are in play.

The only slight niggle I had with the casting was that Supriya Pathak didn't exactly look like a mother to someone like Manoj Pahwa or Vinay Pathak, though the actress was beautifully restrained in her role. While all the actors are fantastic, Konkona Sen Sharma made her performance standout in the latter portions. Massey felt a little underused, though he was credible enough as the sleazy nephew.

What I felt the Ram Prasad Ki Tehrvi could have done better is about the pacing in the second half. I am not a fan of making Seema, the only female character who has an ambition of her own as the wrong one, especially when the other women either lost theirs in marriages or remain bitchy. With no clarity over what really went wrong between her and her husband's family, Seema's shallowness is made to be her own and Nishant being the better partner in the marriage. We never really get to hear her side, only her transformation in the finale.

I also felt that the matriarch's desolation over her husband's loss didn't come across very convincingly, which was needed to make the final scene so empowering. More than often, it was her silent frustration at her kids that came out.

That said, there is one nice touch that I want to point out about her character. Initially when every visitor who come in asks her 'kaise hua?', forcing her to retell the last minutes of her husband's life. Her grandsons laugh at this question being repeated every time prompting her to give the same answer the same. We smile. But later on, when another visitor asks the same question, the matriarch breaks down while giving the answer. It isn't funny anymore, and even her grandsons don't make a joke there. It is such little nuances that makes Ram Prasad Ki Tehrvi a nice watch.

PS: As a Side-Recommendation, if possible, do check out this Malayalam film, Manjadikuru, which is set around a mourning extended family. It is the directorial debut of Anjali Nair, who you might know as the entertainer who made Ustad Hotel and Bangalore Days. Unfortunately, I was not able to get any streaming options online to share. So any Mallu fans here can help out by sharing the link in the comments section below.

- Pacing Issues in Second Half

(The above story first appeared on LatestLY on Apr 25, 2021 12:58 AM IST. For more news and updates on politics, world, sports, entertainment and lifestyle, log on to our website latestly.com).