Roohi is the first film in the genre that Alexx O'Nell has tried, but the Bollywood actor of American origin says he is familiar with the art of making people laugh through acting. This is the third time Alexx has worked with Rajkummar Rao, after the feature film Chittagong (2012) and the web series Bose: Dead/Alive (2017). 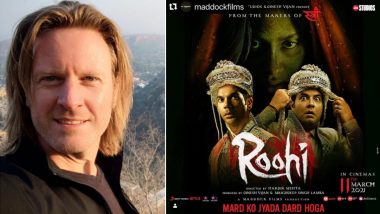 The new horror comedy Roohi is the first film in the genre that Alexx O'Nell has tried, but the Bollywood actor of American origin says he is familiar with the art of making people laugh through acting. Alexx, who hails from Connecticut, plays Tim, an American filmmaker, who arrives at a tiny village in rural India to do a story on a very unique small-town tradition. Roohi Movie Review: Rajkumar Rao, Janhvi Kapoor and Varun Sharma's Horror Comedy Will Make You Giggle!

"This is indeed my first horror comedy and it is in fact, my first comedy since 2012, when Akshay Kumar and I faced off as rival scientists in Joker. While it has certainly been a while, I am no stranger to comedy. I perform in numerous comedy plays and musicals as a stage actor in the US, and I started my Indian film career with small roles in back-to-back-comedy movies Cheeni Kum and Loins Of Punjab Presents way back in 2007. Janhvi Kapoor and Rajkummar Rao's Roohi Released in Theatres; 5 Other Popular Bollywood Horror-Comedies and Where To Watch Them Online!

It was nice to have had some laughter while shooting Roohi, without having to realign my energies to the heavy and dramatic content I have been used to shooting. It's wonderful too -- I have a funny film releasing for a change," Alexx tells IANS.

On his preparation for the role, he adds: "I studied the screenplay and created Tim's back story -- where he is from, why he is there, and where he is going. I had worked as a videographer many years ago and I also worked briefly in journalism. So I had a good understanding of how someone who liked Tim would go about executing his story. But I also took a good look at documentaries as well as mockumentaries, most notably This Is Spinal Tap, to get a feel for how I wanted Tim to present himself on screen," he says.

This is the third time Alexx has worked with Rajkummar Rao, after the feature film Chittagong (2012) and the web series Bose: Dead/Alive (2017). "Raj is a fantastic actor, and I jumped at the opportunity to work with him again. The funny thing is, after my characters in ‘Chittagong', and ‘Bose', which were quite literally trying to kill Rajkumar's, it's nice for us to be friends on screen for a change! So, while this isn't a role quite as large as some of the others I have this year, I always appreciate the opportunity to work with excellent artistes like Raj," shares the actor.

(The above story first appeared on LatestLY on Mar 11, 2021 09:31 PM IST. For more news and updates on politics, world, sports, entertainment and lifestyle, log on to our website latestly.com).