The movie has its share of genuine laughs with some iconic moments borrowed from films such as Titanic and Dilwale Dulhania Le Jayenge that will make you laugh. Rajkumar Rao and Varun Sharma's jodi is the real show-stealer of this endevour! 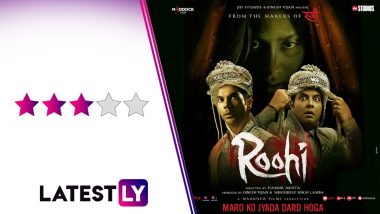 Director Amar Kaushik's 2018 film Stree certainly raised the bar to the next level when it comes to horror-comedy genre in Bollywood.  The latest offering from the same universe titled Roohi starring Janhvi Kapoor, Rajkummar Rao and Varun Sharma attempts to evoke equal amounts of thrills and giggles. It's the sincere performances of the two leading men and their hilarious one-liners that make this endeavor a fun watch. Director Hardik Mehta gives you an out-and-out entertainer in the form of this movie to ward off the corona times' blues.

Bhawra played by Rajkummar Rao and Kattanni (Varun Sharma) make a living by kidnapping girls to marry them off forcibly with a guy whose family has already decided that their match is going to be just perfect. Things go horribly wrong when they kidnap Roohi played by Jahnvi Kapoor only to discover that this girl is different in that she has been possed by a witch (chudail). That means the duo has to deal with two diametrically opposite personalities. Roohi's body has been possed by Afzana who has her own past to resolve. Things become interesting and quite convoluted when our kidnappers fall for the girl. How will they handle this situation? Is there any solution that can possibly take them to the desired destination without getting themselves killed in the bargain? To get the answers to these tricky queries you have to watch the film. Janhvi Kapoor and Rajkummar Rao's Roohi-Afzana Gets a New Title and a Release Date, Film Will Now Clash with Kiara Advani's Indoo ki Jawaani on June 5, 2020

The movie has its share of genuine laughs with some iconic moments borrowed from films such as Titanic and Dilwale Dulhania Le Jayenge. From Rose letting Jack slip away from the physical world to the legendary 'palat' scene,...yes, their hilarious revisit and recreations do evoke giggles.  Writer Mrighdeep Singh Lamba and Gautam Mehra ensure that they make the ride breezy with smart one-liners and punches that land well. The film would have turned out more engaging had it been substantiated by a concrete narrative and a solid screenplay. The convoluted and the complex subplots make the desperate attempt a bit of a sluggish affair in parts.  At over two hours, the film could definitely do with a sharper edit. The two major songs  Nadiyon Paar and Panghat composed by Sachin–Jigar lingers on your lips long after leaving the hall. Dasvi Star Abhishek Bachchan Wishes Janhvi Kapoor, Rajkummar Rao and Team Good Luck for Roohi (Watch Video)

Considering all the enthusiasm which is apparent to revisit the much-celebrated theme of Stree, this movie could have been much crisper (had the makers paid more attention to details).  If good intentions and boundless enthusiasm alone could make a fantastic film then Roohi could easily have given films from the same genre such as Bhool Bhoolaiya and Go Goa Gone a run for their money. Sadly, it doesn't! Roohi Review: Janhvi Kapoor, Rajkummar Rao and Varun Sharma’s Horror Comedy Invites Mixed Reactions From Critics

Varun Sharma is absolutely impressive in Roohi. He sort of evokes giggles effortlessly by making even the ordinary stuff look pretty clever. The fine blend of his comic timing and those nuanced expressions make him such a delight to watch. Janhvi Kapoor struggles to match both Rajkumar and Varun's acting prowess but the makeup artists and VFX do the trick to make the lady look the part. Rajkummar Rao's diction oscillates a lot and that may detach you from the narrative. Janhvi Kapoor screams, howls, or go absolute thanda with what she offers that looks uniquely unidimensional even if she is playing two personalities in the film. All in all, watch Roohi for the humour so skillfully delivered by Rajkumar and Varun. Expecting more than that might leave you disappointed!

(The above story first appeared on LatestLY on Mar 11, 2021 11:40 AM IST. For more news and updates on politics, world, sports, entertainment and lifestyle, log on to our website latestly.com).