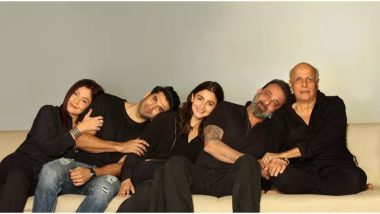 Alia Bhatt and Aditya Roy Kapur starrer Sadak 2 was announced way back. However, the shoot had to be stalled half-way due to the coronavirus outbreak. The film by Mahesh Bhatt also stars the lead cast of Sadak; Sanjay Dutt and Pooja Bhatt.  As Bollywood is again getting back on track with new shoot schedules, Sadak 2 shoot is also likely to see the light of the day next month. Sushant Singh Rajput Demise: Mukesh Bhatt Had Approached the Actor for Sadak 2 and Thought He Was a Disturbed Soul.

Bollywood Hungama quoted that reports are on that the film shoot will re-start in July first week. The report also says that a song with all four actors was supposed to be shot in Ooty. However, as that might not happen now, they will shoot it in Mumbai itself. They are also contemplating on which studio should they choose for the shooting of the film.

On the other hand, there is a discussion going on about the releases of the film. The filmmakers are busy taking a call on theatrical release vs OTT release during lockdown. But Mahesh Bhatt has apparently taken a decision already to release Sadak 2 on digital platform. As per Rajeev Masand's column in the Open Magazine, he will let the film go the OTT way by releasing it on Disney+Hotstar. Fox Star Studios which is owned by Disney is co-producing the film, hence this digital platform. Other movies like Shakuntala Devi, Kargil Girl, Laxmmi Bomb are also getting released on various digital platforms.

(The above story first appeared on LatestLY on Jun 20, 2020 11:03 AM IST. For more news and updates on politics, world, sports, entertainment and lifestyle, log on to our website latestly.com).