Salman Khan Shares a Video of Salim Khan Singing and Now We Know Where He Gets His Musical Genes! 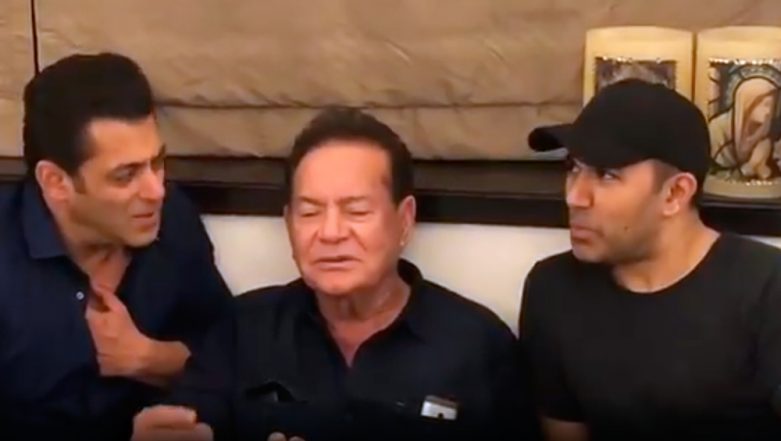 That actor Salman Khan is totally devoted to his parents, is one thing that we all know. And the actor too, has shown us that side of his on multiple occasions. For Salman Khan and even the rest of the ‘Khandaan’, its always been a matter of ‘Family comes first’ and that kinda loyalty is very admirable. The Khan and his Khandaan is known to give fans a time to time look into that envious but adorable and amazing family bond. Recently, Salman Khan posted a video where he was seen happily indulging in some fun and games with his brothers’ children. Salman Khan Plays The Hand Slap Game With His Nephews And Transports Us Back To Our School Days; Watch Videos

And now, Salman Khan is back to sharing some of his family time will all of his followers. In a recent video posted by the actor, we can see Salman and Atul Agnihotri sit and croon alongside Salim Khan.

Take a look at the video below:

The Sultan, Tiger, Bharat of our family . . Singing @luvsalimkhan pic.twitter.com/Hy0HeakztR

Well, Salman and Atul try to match sur and taal with Salim while the still good looking octogenarian sings away to glory. On the work front, we will see Salman next in Prabhu Dheva's Dabangg 3 with Sonakshi Sinha, following which the actor will get busy with Sanjay Leela Bhansali's Inshallah, which stars Alia Bhatt opposite him and Kick 2, which will have Jacqueline Fernandez as the female lead.