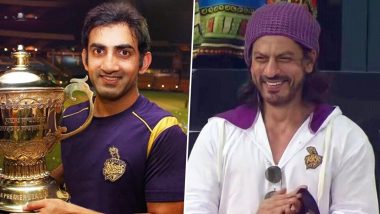 Bollywood's King Khan Shah Rukh Khan has a heartfelt birthday wish for the former cricketer and ex Kolkata Knight Riders captain Gautam Gambhir. Taking to Twitter, the superstar wished Gambhir a happy birthday. It was under the leadership of Gautam that KKR had earlier snatched two trophies in the Indian Premier League (IPL). Currently, the cricketer is retired from all formats of cricket but is still missed by his fans. And on the occasion of his 39th birthday, SRK lauded his leadership skills. Happy Birthday, Gautam Gambhir! Family Photos of Former Indian Opener and Lesser-Known Things to Know About the Cricketer-Turned-Politician.

It was in 2012 and 2014 that Kolkata Knight Riders won IPL under Gambhir's guidance. However, later he joined Delhi Daredevils. The left-handed batsman was known moreover for his super knocks and quick running skills on the field. And what a better surprise for the cricketer-turned-politician than a wish from Shah Rukh Khan. The two are also good friends with each other. Gautam Gambhir Birthday Special: 93 vs RCB & Other Spectacular Knocks by Former KKR Captain in IPL.

For all the lovely moments and leadership you showed my friend. A very happy birthday to you. https://t.co/Tdo97Mh9So

Gambhir was the top scorer of SRK owned KKR team with 3345 runs in 122 matches for three seasons before being a part of Delhi Daredevils. On the work front, Shah Rukh Khan is currently focusing on his production house Red Chillies and has not announced any film after Zero (2018). Stay tuned!

(The above story first appeared on LatestLY on Oct 14, 2020 07:07 PM IST. For more news and updates on politics, world, sports, entertainment and lifestyle, log on to our website latestly.com).