We all have seen Shefali Shah as the actor extraordinaire. However, there is more to her than what meets the eye. So, on her 49th birthday today, let's take a look at some unknown facts about the talented artist. Read on. 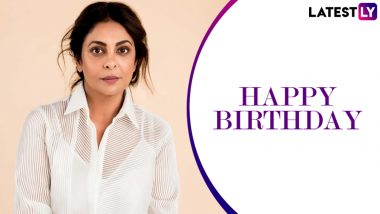 Shefali Shah is not just an actress, she’s a powerhouse of talent. Over the years, we’ve seen her on small and big screens making everyone go awe with her phenomenal acting. Satya, Waqt: The Race Against Time, Dil Dhadakne Do, Juice are some of her prominent works. However, the turning point in her career came in with Netflix’s Emmy-winning series Delhi Crime where her role as DCP Vartika Chaturvedi left an impression and how! Recently, we also saw in anthology series Ajeeb Dasstaans Ankahee, and boy what an act. In a nutshell, the lady is tip-to-toe born to be an artist. And as she celebrates her birthday on July 20, let's take a look at some of her lesser-known facts. Shefali Shah's Directorial Debut 'Someday' is Heading to Indian Film Festival Stuttgart.

While Shefali is known for the crime thriller Satya. However, it was not her first film in Bollywood. As she entered the showbiz in the year 1995 with a minor role in Ram Gopal Varma's Rangeela, which starred Aamir Khan and Urmila Matondkar in the lead.

In an old interview, Shah had revealed that her favourite fiction writer is Roald Dahl. On her reading habit, she had said, "I began reading when I was around 9-10 years. I don’t remember when exactly, actually. I was a single child and didn’t have friends so I just got hooked on to books.” Shefali Shah's Reaction To Delhi Crime's International Emmy Win Is Priceless! (Watch Video).

In one of her latest Instagram Q&A session, Shefali had answered how she had declined roles in Kapoor and Sons and Neerja. “Many.. Kapoor and Sons, Neerja," Shah had replied to a fan question.

The actress has her own Instagram page namely Shefali Shah Art where she puts her superb work on display for the world to know that she's multi-talented. You will be blown away by her artistic skills and we ain't kidding. Bravo is the word!

That's it, guys! These are some of the facts about the actor extraordinaire. Workwise, she was last seen in Ajeeb Daastaans and is currently in the news for her directorial titled Happy Birthday Mummy Ji. HBD, Shefali Shah, keep rocking!

(The above story first appeared on LatestLY on Jul 20, 2021 08:20 AM IST. For more news and updates on politics, world, sports, entertainment and lifestyle, log on to our website latestly.com).