There's hardly anyone who doesn't like Sholay. We aren't talking about Indians but foreigners who have watched this movie of epic proportions. A video is going viral which has a few Iranian fans of the film reenacting the Jab tak hai jaan sequence from the movie 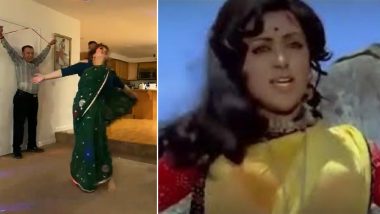 Sholay (1975) has ceased to be a movie now. It's an emotion, nostalgia and at times, Bollywood's biggest identity. Nothing about this film gets old, not even the dialogues that have been used, reused, abused, misused plenty of times in the entertainment world. Reenactments of the movie's scenes don't end either. It's not just true with Indians but Iranians too. A video of a couple of Iranians recreating the climax song "Jab tak hai jaan" from the film is going viral and it's simply fantastic. Madhya Pradesh Girl Reanimates 'Sholay' Act, Climbs Atop Hoarding to Marry Boy Against Mother's Wishes

The video has a couple of people in their positions with a man being tied up just like Dharmendra was in the song. A lady in a green saree is dancing to the beats of the song much like the legendary Hema Malini. It's so amazing to see Bollywood reach far and wide. Sholay is an epic movie and has fans everywhere. This is just a small example of what a classic this movie is. Sholay Completes 45 Years: Amitabh Bachchan, Ramesh Sippy, Hema Malini Reminisce Their Bollywood Blockbuster

Check out the videos right here...

In case, you missed the whole performance...

A few days back, yet another Sholay fan used the water tank scene to convince her mother to let her marry the guy of her choice. She climbed a hoarding though!

(The above story first appeared on LatestLY on Mar 29, 2021 03:14 PM IST. For more news and updates on politics, world, sports, entertainment and lifestyle, log on to our website latestly.com).