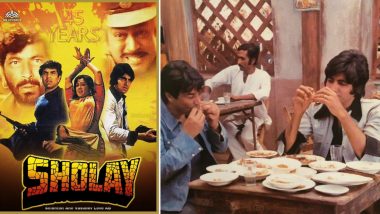 The blockbuster Sholay turned 45 on August 15. Amitabh Bachchan, Hema Malini and director Ramesh Sippy looked back to dissect how and why the film stays fresh and relevant in the minds of people even after so many decades. "Sholay" starred Amitabh Bachchan, Dharmendra, Sanjeev Kumar, Hema Malini and Jaya Bachchan among others. The film is remembered for Amjad Khan's iconic performance as the film's arch villain, dacoit Gabbar Singh. 45 Years Of Sholay: Jai-Veeru As Army Officers, Amjad Khan Replaces Danny Denzongpa – Five Things That Were Planned But Never Happened

"The way ï¿½Sholay' was written, and the detail in which each and every character of the movie was etched, all the characters of ï¿½Sholay' are still fresh in people's mind -- be it Gabbar's dialogue or Basanti's non stop babbling. Even a character like Sambha, who in the entire movie spoke only two words, is till today fresh in the memory of people," Sippy told IANS. Sanjeev Kumar Birth Anniversary: Fans Pay Tribute to the Sholay Actor (Read Tweets)

Big B, who played Jai, spoke of how the film, besides creating new records, was about many production firsts. " ï¿½Sholay' beautifully in three hours encapsulated the victory of good over evil. It was the first time ever that a dialogue CD for an Indian film was released. Action sequences were for the first time directed by a British crew, specially invited to India for the film, and then the film was edited in the United Kingdom -- so many firsts occurred.

Ramesh Sippy ji as a director made many unconventional changes in its reproduction and its making -- the location, the action coordination, the camera work, the 70 mm and the scale -- I guess it all worked out fine," said Bachchan. The film was released on Independence Day 1975. Looking back, Sippy has an interesting anecdote. "I spoke to a theatre owner in south Mumbai after the film released at the box office, and he showed me the popcorn and refreshments counter and said look, it's empty.

At first, that upset me a little because I thought my film wasn't doing well and that's why there were no people at these counters. But then, he told me that all the audience was glued to their seats inside the theatre, and they didn't want to leave the hall. That is how capturing the film was. I couldn't have been happier!" he recalled. "A lot of technological advancements were done way back then, be it the action sequence, or the editing or the way the film was shot. Hence people enjoy ï¿½Sholay' even today," Sippy noted.

Hema Malini, who played Basanti, said: "Before we started shooting, I was told that there is a dance sequence where my character would be dancing on glass on a rough mountain. The shoot took place over the month of April when it is extremely hot. I remember Ramesh ji being very particular about it, but that sequence went on to become an epic."

(The above story first appeared on LatestLY on Aug 15, 2020 06:48 PM IST. For more news and updates on politics, world, sports, entertainment and lifestyle, log on to our website latestly.com).