Shruti Haasan Reveals Why Genuine Friendships Are Rare In The Film Industry! VIDEO 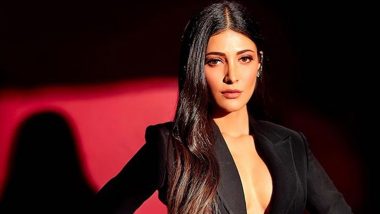 Ahead of the release of her film Yaara co-starring Vidyut Jammwal and Amit Sadh, actress Shruti Haasan chatted exclusively with LatestLY. In this  conversation Kamal Haasan's daughter talked  about true friendships in the industry. While her film is a tale about bonding  and brotherhood, Shruti maintains that true friendships are rare in the film industry, as opposed the camaraderie one witnesses in the music industry.

"When you compose a song, as an artist, you tend to work as a unit with other fellow musicians and singers. You are always in sync with each other, be it a musical concert or a piece you are working on as a unit. I have sensed a strong element of unity and friendship in the music industry as opposed to the film (industry). As an actor, one knows that such is the way in which film making functions, in parts and pieces, that once your part is done, you tend to move away from that portion. That doesn't happen in music creation. Making music is more collaborative and more conducive for true friendships, " stresses Shruti who has dabbled in the entertainment arena both as an actress as well as a singer. Shruti Haasan on Nepotism: 'Doors Opened for Me Because of My Surname'

While the discussions revolving around the topics of nepotism and the growing sense of isolation is gaining momentum, Shruti believes that competition is everywhere.  "isolation does seep in when the competition is fierce in life in general. When the stakes are so high and when everybody is ultra competitive, one can sense that isolation. Friendship has been an integral part of my life. Friendship is something you choose consciously and your friends can either make you or break you completely.  I have true friends in the industry as well and I value those equations," she stresses.

(The above story first appeared on LatestLY on Aug 11, 2020 03:03 PM IST. For more news and updates on politics, world, sports, entertainment and lifestyle, log on to our website latestly.com).