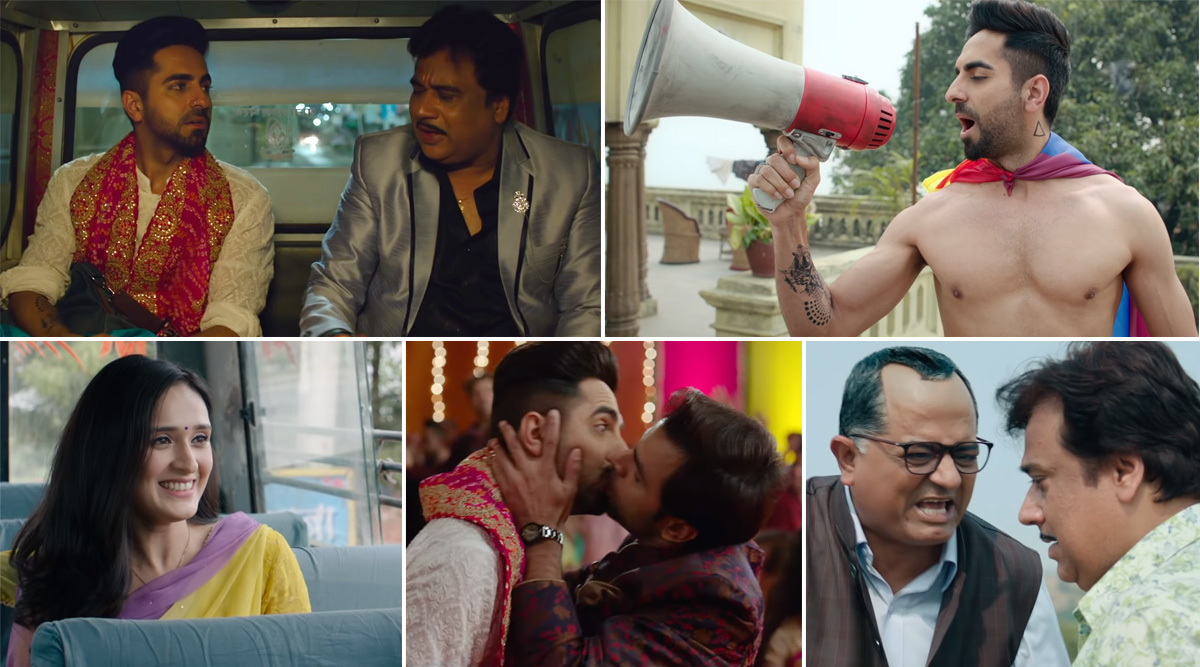 After its super quirky teaser and first look, the trailer of Ayushmann Khurrana's upcoming film, Shubh Mangal Zyada Saavdhan is finally here. The film has been the talk of the town ever since its announcement given that it will be a gay love story between Khurrana and Kota Factory fame, Jitendra Kumar. The film also stars Badhaai Ho fame duo Neena Gupta and Gajraj Rao will also be seen in supporting roles. After having a splendid 2019 with hits such as Article 15, Dream Girl and Bala, Ayushmann will kickstart the new year with this film and it looks like this is going to be his next biggie.  Shubh Mangal Zyada Saavdhan Teaser: Ayushmann Khurrana's Gay Romance is All About '100% Prakritik Pyaar' (Watch Video).

The trailer of the film is as expected, light-hearted and full of quirks but at the same time makes important points relating to homophobia in the Indian society. Ayushmann impresses once again with his act and we think Jitendra Kumar fits the bill perfectly for his role too. With a strong supporting cast playing the family members to the lead characters, the trailer promises to be immense fun. It comically describes a family's opposition to gay marriages and how the duo will win them over eventually.

Earlier in an interview, speaking about the film, Khurrana had said, "I had to back this important project and do my bit to raise more awareness around this sensitive issue. It is an honour that Aanand L Rai sir felt that through Hitesh Kewalya's vision, I could be entrusted to play this important role on screen and take a very important message to as many families and parents in India. This is my attempt at celebrating the individuality of all Indians and championing inclusivity that truly defines us all as human beings."

The film in association with Aanand L Rai and Bhushan Kumar has been directed by Hitesh Kewalya. Shubh Mangal Zyada Saavdhan is all set to release on on February 21, 2020.