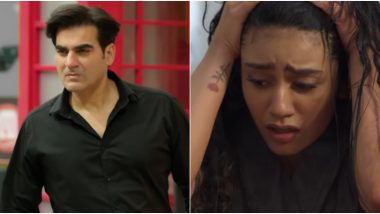 A new trailer for the upcoming film, Sridevi Bungalow, is out now.  What do you expect from a trailer that's been named on YouTube as 'Sridevi bungalow' and would not mind misspelling the lead actor Arbaaz Khan as Arbaz. Somehow, the makers got superstar Mohanlal to share the trailer on social media. The movie was announced a few weeks after the demise of Sridevi, which led to speculations that the movie is insensitive to the tragedy. However, the makers have claimed that other than the similarity in name with the late actress, there is no similarity. The movie stars Priya Varrier as the female lead, playing the role of a disturbed actress. Arbaaz Khan's Girlfriend Giorgia Andriani to Debut in Sridevi Bungalow and Not Dabangg 3.

The trailer of Sridevi Bungalow is no less than bizarre. The editing is jarring. The one song included in the trailer sounds bad, to say the least. The acting is awful. There is a fight sequence that looks utterly forced and unchoreographed. There is absolutely nothing that is working in the favour of the film. The movie looks so bad that it makes Salman Khan's Race look like Guru Dutt's Pyaasa in comparison. After Sridevi Bungalow, Priya Prakash Varrier Signs Second Bollywood Film Titled 'Love Hackers'.

Priya Varrier became a viral sensation thanks to her charming winking in the movie Oru Adaar Love. The actress has not made a good choice to foray into Bollywood. We hope her subsequent movie choices are better.

Sridevi Bungalow is written and directed by Prasanth Mambully. It is a multilingual film produced by Chandrashekhar SK. Sinu Sidharth is the DOP, while Babu Rathnam has edited the film.

(The above story first appeared on LatestLY on Sep 24, 2020 04:25 PM IST. For more news and updates on politics, world, sports, entertainment and lifestyle, log on to our website latestly.com).