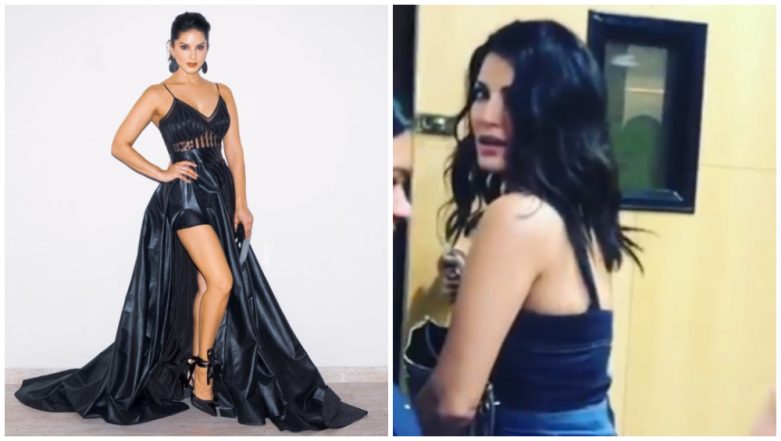 Sunny Leone has aced her social media game. She is one of the rare celebrities who make sure to show fans her fun and candid side along with the aesthetically shot pictures on social media. Sunny took to her social media pages to share a video that is loaded with humour. She was at a radio station for an interview, it seems, when she began to slip some banana bread into her purse. The RJ caught her stealing and recorded everything on camera. Sunny says that she is only loading up her purse with the banana bread for her crew as she can't see food go to waste. "This is not for me, I am allergic to nuts," the actress funnily screams at the camera. Sunny Leone's Holi Special Pic With Family Shows How She Loves and Enjoys The Festival Of Colours!

The entire episode is obviously staged, but still, it is hilarious to watch. In the past, we have seen Sunny upload videos of her crew members playing pranks on her and her retaliation to it. This latest funny video surely takes the cake.

Ummmm yes I have so much fun working!

After all this, my team didn’t even give me a piece of cake! They just took it and ate it! Didn’t even offer me!!

Thanks @RadioMirchi and @mirchiprerna for letting me steal cake! So much fun! pic.twitter.com/IjTh9dhx7G

How cute was that? Can you believe this cutie is the same person who made heads turn at the Filmfare Awards 2019 in a red hot dress? How does one switch between hot and cute so easily! We are impressed.

On the work front, Sunny has a few exciting projects that we know of. The actress will be seen in a cameo appearance in Arjun Patiala which stars Kriti Sanon and Diljit Dosanjh. Sunny will also be making her Malayalam debut with the film, Rangeela. She will also be seen in an epic Tamil movie, Veeramadevi. She was last seen hosting the latest season of Splitsvilla and in the second season of her web series, Karenjit Kaur: The Untold Story.