The Narcotics Control Bureau (NCB) is probing the drugs angle in Sushant Singh Rajput’s death case. The team arrived at Rhea Chakraborty’s residence on Sunday morning to serve her summons. 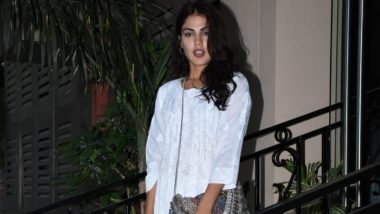 The Narcotics Control Bureau (NCB) is probing the drugs angle in Sushant Singh Rajput’s death case. The team arrived at Rhea Chakraborty’s residence on September 6, Sunday, morning to serve her summons. The actress has been asked to appear today for the probe. The NCB had recently arrested Rhea’s brother Showik Chakraborty, late actor Sushant’s house manager Samuel Miranda and a few others related to this case. Rhea Chakraborty's Father Retd Lt Col Indrajit Reacts to Son Showik's Arrest by NCB.

NCB has issued summon to Rhea Chakraborty and asked her to join the investigation. Joint Director of NCB, Sameer Wankhede stated, “Summon has been given to Rhea. She was at her home,” reports ANI. She can either come on her own or with the team. Rhea has to appear before NCB today. On September 5, the NCB had told Mumbai Court, “There are specific roles/ingredients of criminal conspiracy, abetments and various attempts to commit offences.” Sushant Singh Rajput Death Case: Showik Chakraborty, Brother of Rhea Chakraborty, Samuel Miranda Sent to NCB Custody Till September 9.

#RheaChakraborty has been asked to join the investigation today itself. She has to appear before NCB today: Narcotics Control Bureau (NCB) https://t.co/TsenXdaqjT

We have summoned her (#RheaChakroborty). She will come respecting the summon: NCB Zonal Director, Sameer Wankhede, in Mumbai pic.twitter.com/EyOvNrbltm

The court has granted the agency Showik Chakraoborty and Samuel Miranda’s custody till September 9. Yesterday, the NCB also said that Showik will be confronted with other accused and Rhea. In its remand plea NCB stated, “The financial trail of all their previous transactions of drug purchases has to be verified.” After the arrest of Rhea’s brother Showik, their father Retd Lt Col Indrajit Chakraborty had issued a statement in which he said, “Congratulations India, you have arrested my son, am sure next in line is my daughter and I don’t know who is next thereafter. You have effectively demolished a middle-class family. But of course, for the sake of justice everything is justified. Jai Hind!”

(The above story first appeared on LatestLY on Sep 06, 2020 09:18 AM IST. For more news and updates on politics, world, sports, entertainment and lifestyle, log on to our website latestly.com).