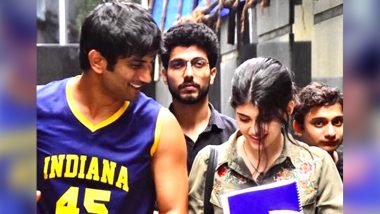 Sushant Singh Rajput's death is still being investigated. While trolls on social media have already decided the culprits based on dubious knowledge, Mumbai Police is recording statements of people around the actor to arrive at a rational conclusion. Cops have already recorded statements of Mukesh Chhabra, Rajput's servants and managers and couple of others. Today, the late actor's co-star from Dil Bechara, Sanjana Sanghi reached Bandra Police station to give her statement to the police. Sushant Singh Rajput Death: BJP MP Nishikant Dubey Urges Amit Shah to Form SIT to Probe Death of Bollywood Actor

If you remember, sometime in 2018, DNA had reported quoting a source, "Sushant was trying to be ‘extra-friendly’ towards newbie Sanjana Sanghi. On one occasion, she seemed to have got uncomfortable and apparently brought it to the notice of her parents, who reportedly told her to return to the set only if she felt she should." The actor had then shared screenshots of conversations with her that happened while shooting Dil Bechara on his Instagram page to prove it's all a lie. Mukesh Chhabra, director of the film, sided with Sushant claiming that nothing like that happened on the sets. FOX Star Studios acted swiftly and relieved Chhabra of his services on the film till the inquiry was on. Later, Sanghi refuted all such stories on Instagram claiming she wasn't in town when it all happened after social media trolled Sushant for days.

#SanjanaSanghi snapped as she arrives at #bandra police station to record her statement in #SushantSinghRajput case #instadaily #tuesday #manavmanglani @manav.manglani

Dil Bechara will be the first film to exclusively stream on Disney+ Hotstar among their seven Bollywood releases they announced yesterday.

(The above story first appeared on LatestLY on Jun 30, 2020 01:25 PM IST. For more news and updates on politics, world, sports, entertainment and lifestyle, log on to our website latestly.com).