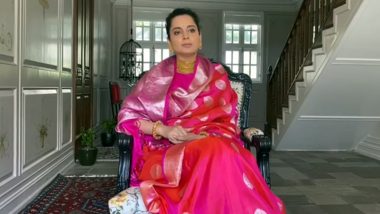 Kangana Ranaut is gearing up to step into actress turned politician Jayalalithaa's shoes in her biopic. Titled, Thalaivi, the movie will revolve around her political journey and the excitement for which is already touching the sky. While the actress is yet to wrap the shooting of her biopic, she's pretty adamant about whenever she finishes, the movie will hit the big screens first and then OTT platforms. Keeping the present scenario in mind, while filmmakers are considering the option to ditch the theatrical release and have a digital premiere instead, Ranaut is firm that it won't be a case with Thalaivi. Kangana Ranaut Slams B-town Celebs for Supporting #BlackLivesMatter Movement, Questions Their Silence on Sadhu Lynching in Maharashtra.

In her recent conversation with Pinkvilla, when the actress was asked if she's in favour of OTT releases or against it, she simply said, "It depends. For example, a film like Thalaivi just can't release on digital because it is such a massive scale film, neither a movie like Manikarnika is a digital space film, but yes films like Panga, Judgementall Hai Kya also cater to that audience. The way the film is made, it is very digital-friendly. They have recovered huge costs through digital itself. So, it depends."

Speaking about the film's digital rights, the actress revealed they have been sold to both Netflix and Amazon Prime for a whopping amount. "For Thalaivi, it is a bilingual film. As a matter of fact, the film is sold to both Netflix and Amazon in both Hindi and Tamil for around Rs 55 crore. They also have satellite rights to sell for both languages and also distribution rights." Kangana Ranaut Cannes Journey: Two Years of Wrecking a Fiesty, Fashionable but Fiercely Feminine Havoc!

Coming to her remuneration and if she plans of cutting down her fees in future, the actress explained the scenario by saying, "Whenever a project is conceived, there is a financial blueprint to it, recovery blueprint to it. Then they match actors and their market worth and accordingly are approached. When I take a project, I always see the recovery blueprint and then I charge."

While her first look received mixed reactions from audiences, let's hope the final outcome is able to bag heaps of praises and praises only.

(The above story first appeared on LatestLY on Jun 04, 2020 04:54 PM IST. For more news and updates on politics, world, sports, entertainment and lifestyle, log on to our website latestly.com).