Priyanka Chopra Jonas and Rajkummar Rao starrer The White Tiger's official trailer has finally dropped online and it'll surely give you goosebumps. It touches upon the subjects like corruption, class divide, poverty that still exists in the society. Check out the official trailer here. 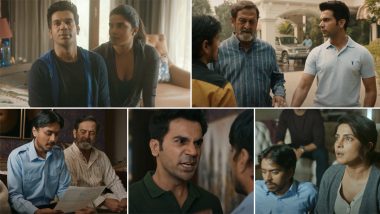 The moment you all have been waiting for is here! As Priyanka Chopra Jonas and Rajkummar Rao starrer The White Tiger's official trailer has finally dropped online and it'll surely give you goosebumps. The flick is based on Aravind Adiga’s New York Times-bestselling novel and 2008 Man Booker Prize-winning book of the same name. Right from the first shot, the trailer impresses. Helmed by Ramin Bahrani, the movie will also see debutant Adarsh Gourav playing a major role. Going by the glimpse, the film has romance, action, as well as, lots of twists and turns. The White Tiger Teaser Trailer: Priyanka Chopra, Rajkummar Rao's Riches Inspires a New Slumdog Millionaire (Watch Video).

The White Tiger touches upon the subjects like corruption, class divide, poverty that still exists in the society. The social satire tells the story of Priyanka (Pinky) and Rajkummar (Ashik) who hire Adarsh’s Balram as their driver. However, one night due to some circumstances the couple pushes him in the puddle to save themselves. How Balram refuses to fall for the trap and rebels against the class system in India, is the highlight of the story. The White Tiger: Priyanka Chopra Wears a Mask and Tells What It Is Like to Shoot For the Netflix Film in Delhi’s Pollution (View Pic).

Check Out The White Tiger's Trailer Below:

FYI, this is not a regular rag to riches story as there is more to it for sure. The trailer keeps you glued and curious. The White Tiger will premiere on the streaming giant, Netflix from January 22, 2021. How did you find the trailer? Tell us your views in the comment section below. Stay tuned!

(The above story first appeared on LatestLY on Dec 21, 2020 09:32 PM IST. For more news and updates on politics, world, sports, entertainment and lifestyle, log on to our website latestly.com).