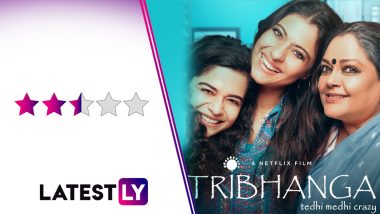 Tribhanga Movie Review: Actress Renuka Shahane directs Tribhanga, a Netflix film, also her first film in Hindi. While she chose to stay behind the camera this time, Shahane gets Kajol to take the leading lady duties, while Kajol's hubby (and fellow actor) Ajay Devgn is involved as a producer. Though Kajol is definitely the face of Tribhanga, it is not just the story of her character, but also of her mother's and her daughter's. With Tanvi Azmi and Mithila Palkar in the cast, Tribhanga was expected to make a well-performed, evocative statement on women empowerment. To some extent, it does, when it doesn't fall under the trappings of theatrical excess. Tribhanga Trailer: This Kajol, Tanvi Azmi, Mithila Palkar Netflix Drama Promises To Take You On A Total Emotional Ride.

Kajol plays Anuradha, a popular Bollywood actress, a trained Odissi dancer and a single mother. During one of her dance performances, she and her pregnant daughter Masha (Mithila Palkar) receive news that her mother Nayantara Apte (Tanvi Azmi) has been hospitalized after suffering a brain stroke and is in coma.

Anuradha, who has been estranged from her mother for some years, does rush to her mother's side, but isn't very willing to let go of the past. Her younger brother, Robindro (Vaibhav Tatwawadi), who is now an ISKCON devotee, is more forgiving about the past and urges his sibling to do so.

Milan (Kunaal Roy Kapur), Nayantara's protege and admirer, was completing her autobiography before she had the stroke. As Nayan wanted both her kids to share their versions of their stories about her, Milan urges both Anuradha and Robindro to narrate their pasts. Through some well-placed flashbacks, we learn more about Nayantara's fiercely independent nature and how it has adversely affected Anuradha's childhood, even making her a victim of sexual harassment.

Tribhanga is a curious conversation on the correlation between feminism and motherhood, depicted through its three principal protagonists. At one end, we have Nayantara who chooses to leave her husband when she realises she can't adjust with her old-school mother-in-law. Her independent streak, however, makes her oblivious of the trauma that her daughter is going through. Anuradha, on the other hand, should have been an antithesis of Nayan. Instead, she is the continuation of her mother's independent streak, after having scalded herself in a bad marriage, and then calling the institution a 'societal terrorism'.

While she calls Maasa as the balance between both herself and Nayan, Maasa is the one who is quite opposite her mother. Shunning both her maternal figures' independent streak, she prefers to be the obedient, docile daughter-in-law in a conservative family. Through these three women, Shahane raises an interesting critique of feminism and how it affects maternal instincts. The internal debate has its moments in this very tedhi medhi family drama, where major conflicts are easily solved over conversations and passage of time, as the daughter finds in herself the magnanimity to forgive her mother. In a way, this could be Shahane's take on Kabhi Khushi Kabhie Gham.

The contained setting of the film and its cast avoid needless distractions, though, we can't get rid of the feeling that we are watching a play rather than a movie. The writing isn't always strong, though it has its good points. OTT Releases Of The Week: Marvel’s Wanda Vision on Disney+ Hotstar, Saif Ali Khan’s Tandav, Regina King’s One Night in Miami on Amazon Prime and More.

Also, 'contained' is a term that I cannot use for Kajol's performance in the film. As the potty-mouthed actress with a traumatic past, Kajol feels very artificial among the ensemble - at times, loud and jarring, and often one-note. Also, while the other two main characters feel sorted in their views, her Anuradha feels muddled in what she wants. Moreover for a person who claims independent thinking, why does she keep trolling Milan's choice to speak in chaste Hindi?

The show actually belongs to Tanvi Azmi, who brings enough grace and a fiery determination in a very complex role. Mithila Palkar delivers a good performance, especially in the third act, though I wish her character was given more scope earlier, considering she completes the triumvirate. Among the male actors, Vaibhav Tatwawadi stands out with an assured act.

Through Tribhanga, Renuka Shahane raises some very interesting insights on feminism and motherhood. However, the drama is often let down by its writing and the uneven performance of its lead actress. Tribhanga is streaming on Netflix.

(The above story first appeared on LatestLY on Jan 15, 2021 02:00 PM IST. For more news and updates on politics, world, sports, entertainment and lifestyle, log on to our website latestly.com).