Urmila Matondkar Joins the Nepotism Debate in the Industry, Says She Was Discriminated Against More by the Media than Film Fraternity 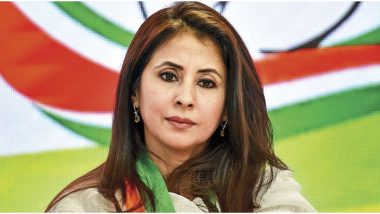 Who knew a star like Urmila Matondkar would have faced nepotism in the industry? For the ones who thought if the practice gained momentum only recently and the production houses like Dharma should be blamed for making it so prevalent, here's what Urmila has to say about her experiences. The actress in her recent conversation with journalist Barkha Dutt opened up about her struggles in the industry and how she believes she was written off like nobody else in the industry and why media was more discriminating towards her. Urmila Matondkar Appreciation Tweets Flood Twitter After Kangana Ranaut Calls Her 'Soft Porn Star'.

"This word called ‘nepotism’, if I start talking about it, I will have to talk for quite a few hours. The amount of it that I have faced, in spite of being from Mumbai, was quite alarming, to say the least. There were some 16-17 new girls who were introduced that year and out of them, some eight or nine of them were somebody or the other’s daughters. I will tell you a few of them - Raveena Tandon, Karisma Kapoor, Pooja Bhatt, Kajol, lots of them," Urmila said when asked to describe her struggles with nepotism.

Recalling her initial days, the actress turned politician said, "After my first film, I made a decent name for myself as a good dancer and a decent actor, and yet, I struggled tremendously. By the time I was doing Rangeela, I was written off like no other actor in the history of cinema. ‘She makes faces’, ‘her language’...everything." The actress even revealed how Rangeela was being praised for everything but she never received any appreciation for her performance. Urmila Matondkar Slams Kangana Ranaut, Asks Her to Start the Attack on Drug Problem in Her State.

Nepotism was always a part of Bollywood film industry and Urmila believes she was judged by a different yardstick than star kids. The actress also insists she was discriminated against more by the media than the members of the film fraternity. And yes, she wasn't even nominated at award ceremonies for her performances. However, she chose to ignore the negatives and focus on the positive side of the industry.

(The above story first appeared on LatestLY on Sep 18, 2020 08:33 AM IST. For more news and updates on politics, world, sports, entertainment and lifestyle, log on to our website latestly.com).