Urmila Matondkar Slams Kangana Ranaut, Asks Her to Start the Attack on Drug Problem in Her State

Urmila Matondkar has slammed Kangana Ranaut for her comments comparing Mumbai to PoK and allegedly hijacking the Sushant Singh Rajput controversy for her own personal gains. 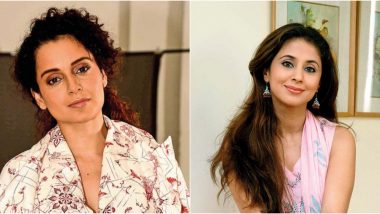 Urmila Matondkar has slammed Kangana Ranaut for her comments comparing Mumbai to PoK and allegedly hijacking the Sushant Singh Rajput controversy for her own personal gains. Urmila ruled the silver screen in the '90s to early '00s and she also had a brief political career from which she resigned in September 2019. In a new series of interviews, Urmila has launched an attack on Kangana. "The entire country is facing the menace of drugs. Does she (Kangana) know Himachal is the origin of drugs? She should start from her own state," Urmila Matondkar said in a chat with Mumbai Tak. Kangana Ranaut Asks Jaya Bachchan If She Would Side With Bollywood If Daughter Shweta was 'Drugged and Molested' as a Teenager and Son Abhishek Was 'Found Hanging' (View Tweet).

"Why did this person who has been given Y-security from the taxpayers’ money didn’t give information about the drug nexus to the police?," she added. Urmila also asked how the Justice for Sushant movement has turned into Justice For Kangana campaign.

In an interview with Bollywood Hungama, Urmila has said that the word nepotism is being taken advantage of. "In my life, I paid more attention to doing good work, and not focussed on becoming big so that I can teach people a lesson and pull them down," Urmila said.

Earlier, Jaya Bachchan had also slammed Kangana Ranaut in the assembly saying people are biting the hands that feed them. Swara Bhasker has also slammed the Queen actress.

Kangana had been a vocal supporter of Justice for Sushant campaign. She said that she's more afraid of the Mumbai Police than 'movie mafia' prompting Shiv Sena to tell her to not come back. To this, Kangana compared Mumbai to PoK. Sanjay Raut called her 'haramkhor ladki'. Party supporters also issued threats to the actress, who eventually returned to the city with & security issued by the centre. But, before she could set foot on Mumbai soil, BMC had bulldozed her office down citing illegal constructions.

(The above story first appeared on LatestLY on Sep 16, 2020 06:55 PM IST. For more news and updates on politics, world, sports, entertainment and lifestyle, log on to our website latestly.com).