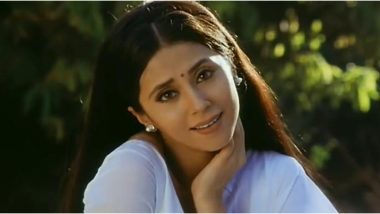 The war of words between Urmila Matondkar and Kangana Ranaut has begun. First, the former criticised and mocked latter in an interview. Kangana retorted by calling Urmila a 'soft porn star' who is not known for her acting skills. Millions of Urmila's fans would like to disagree. Twitter is flooded with appreciation posts for the Pinjar actress, who has been a part of several critically acclaimed projects in her lavish career. Fans have been posting pictures of Urmila from various movies bestowing her with the best of adjectives. The actress's name is, of course, trending everywhere. Ram Gopal Varma Supports His Rangeela Actress Urmila Matondkar After Kangana Ranaut Calls Her A 'Soft-Porn Star'.

Urmila began her career in the '80s as a child actor. She embarked on her Bollywood journey in the '90s. She starred in a movie like Kaun, a role which no other established actress of her time would take up but Urmila. She has given an award-winning performance in the horror film, Bhoot. She won hearts playing a lower-middle-class Mumbaikar in love with a gangster in Satya. She has also worked in path-breaking movies like Ek Hasina Thi and Pinjar. Below are just a handful of appreciation tweets for the actress who can still make hearts go "Chamma Chammma". Kangana Ranaut Calls Urmila Matondkar 'Soft Porn Star', Says 'She's Not Known For Her Acting For Sure' (Watch Video).

Urmila In Rangeela Is All Heart

She's the reason why I watched 'Rangeela' where she plays a carefree girl and aspiring actress.

Her performance as possessed woman in 'Bhoot' is remarkable.

And her anti-hero role in 'Ek Hasina Thi' made the mark. @UrmilaMatondkar pic.twitter.com/EFuZS6palQ

#UrmilaMatondkar is a self made woman. When she did movies she did extremely well for herself. She did lead roles and also did movies in various languages. Her success story is out there! When #KangnaRanaut uses foul language to talk about Urmila, she reveals a lot about herself.

Urmila Is A Powerhouse Of Talent

Ek haseena thi.. hain... who has always been a powerhouse of talent as well!

You are the most beautiful actress.

And guess who turns up on my @Facebook feed , my absolute favorite and someone I really look upto, admire and adore @UrmilaMatondkar and also #KanganaRanuat , both in the same function.

This was the Pune Festival, where we welcomed Ganpati Bappa🤗🙏 🧡❤#ThursdayMotivation pic.twitter.com/ea8n7Z7IKr

Urmila has been away from the silver screen for a while now. But, we hope she makes a smashing return soon. The time is absolutely perfect. The actress did enjoy a brief stint in politics but quit Congress after five months.

(The above story first appeared on LatestLY on Sep 17, 2020 04:32 PM IST. For more news and updates on politics, world, sports, entertainment and lifestyle, log on to our website latestly.com).