The South Korean band BTS extended their reign on the Billboard Hot 100 chart with Butter, remaining at the summit for the seventh consecutive week. 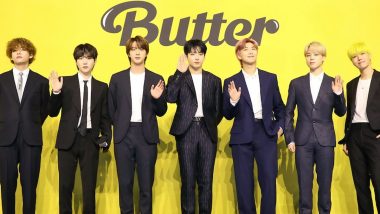 The South Korean band BTS extended their reign on the Billboard Hot 100 chart with Butter, remaining at the summit for the seventh consecutive week. The song is also number 10 on the Pop Airplay chart, their second song so far to enter the top 10. This makes them the first Korean act to have multiple entries in the top 10 of the Pop Airplay chart. BTS’ Hit Single Butter Tops Billboard Hot 100 Chart Sixth Week in a Row.

The septet recently released their CD single "Butter" that includes the brand new track "Permission to dance". The song sends the message that you don't need permission to dance, prompting listeners to get up on their feet and dance again. BTS to Release a Hotter Remix of Butter, Unveil a New Set of Teaser Photos (View Pics).

BTS are known for the way they interact with their fans and also their authentic music. Its band members are RM, Jin, Suga,J-hope, Jimin, V, and Jung Kook. BTS are slated to appear on "The Tonight Show Starring Jimmy Fallon" for two nights on July 13 and 14, where the US television premiere of "Permission to dance" is scheduled to happen.

(The above story first appeared on LatestLY on Jul 13, 2021 02:30 PM IST. For more news and updates on politics, world, sports, entertainment and lifestyle, log on to our website latestly.com).