Andrew Garfield Reveals He Lied to Emma Stone About His Spider-Man No Way Home Role, Shares Her Reaction

Andrew Garfield, who dated Emma Stone after they met on the sets of The Amazing Spider-Man, has shared the reaction the actress had after he lied about his return as the superhero in Spider-Man: No Way Home. 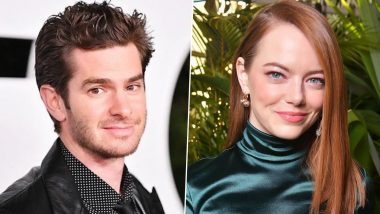 Actor Andrew Garfield, who dated Emma Stone after they met on the sets of The Amazing Spider-Man, has shared the reaction the actress had after he lied about his return as the superhero in Spider-Man: No Way Home. The British actor revealed that Stone kept on texting him about whether the rumours of his involvement in the new film were true, reports aceshowbiz.com. Scream Dethrones Spider-Man No Way Home From Top Spot at US Box Office in Its Opening Weekend.

"Emma kept on texting me. She was like, 'Are you in this new Spider-Man film?'" he recalled. "And I was like, 'I don't know what you're talking about'," the Golden Globe winner admitted. He continued: "She was like, 'Shut up. Just tell me'. I'm like, 'I honestly don't know' - I kept it going, even with her." After Stone watched 'No Way Home' and found out the truth, she was understandably upset with her former boyfriend. Final Destination 6 In Works at HBO Max, Spider-Man No Way Home Director Jon Watts to Produce.

Garfield shared: "And then she saw it. She was like, 'You're a jerk'." He had numerous times denied that he would reprise his role as Spider-Man in 'No Way Home' before it hit theatres. "I heard about it. And I did see it. And it's a Photoshop," he said on 'The Tonight Show Starring Jimmy Fallon' in September 2021 after a leaked photo showed him wearing the suit again.

He further explained his position with the project: "I think that Tom Holland is just the perfect Peter Parker and Spider-Man, so I am super stoked. I get to just be a fan again, which is my preferred position. "To be able to sit in the audience and kind of go, 'Yeah, you screwed up, mate. You didn't do it as well as you could have done, eh?' I get to be that guy that's just like, 'Yeah, I don't really love the suit'."

In a recent interview with TheWrap, the 38-year-old actor admitted it was "stressful" to lie to the media. "It was stressful, I'm not gonna lie. It was rather stressful but also weirdly enjoyable. It was like this massive game of Werewolf that I was playing with journalists and with people guessing, and it was very fun."

"There were moments where I was like, 'God, I hate lying'. I don't like to lie and I'm not a good liar, but I kept framing it as a game," the SAG Award nominee continued explaining. "And I kept imagining myself purely as a fan of that character, which is not hard to do."

(The above story first appeared on LatestLY on Jan 18, 2022 11:57 AM IST. For more news and updates on politics, world, sports, entertainment and lifestyle, log on to our website latestly.com).