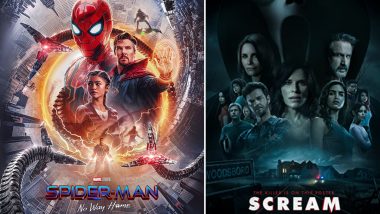 Twenty-five years after a streak of brutal murders shocked the quiet town of Woodsboro, a new killer has donned the Ghostface mask and is targeting a group of teenagers to resurrect secrets from the town’s deadly past. Courteney Cox, Neve Campbell, David Arquette have returned to chase down the killer and stop him from creating fear and chaos. The film that chronicles this story is none other than Scream, the fifth film in the franchise that released on January 14, 2022. Scream Review: Slasher Film Wins Over the Critics With a Sharp, Funny and Bloody Sequel!

Scream had a potent first day at the box office with the collection of $13.3M (including $3.5M from previews), and it eased accordingly on the second day, just like horror movies do, with $10.1M. But, despite the omicron variant dampening moviegoing overall, the film made a sum of $31.5M on the third day of its release and minted $36M on the fourth day with the film screening at 3,664 theatres.

Spider-Man NWH is expected to earn around $26 million over the Martin Luther King Jr. holiday weekend. This will bring its domestic total to $703.9 million. The film will hence become the fourth-highest grossing domestic release in history. It only follows Avatar's $760 million, Avengers: Endgame's $858 million, and Star Wars: The Force Awakens $936 million on th list.

Tom Holland's has also earned over $900 million internationally and its global total is sitting right around $1.62 billion. Sing 2 placed third, has it total earnings summing up tp $8.3 million. The 355 and The King's Man rounded out the top five. Scream: Before the Fifth Film Arrives, Ranking All the Previous Scream Movies in Neve Campbell’s Slasher Franchise From Worst to Best!

(The above story first appeared on LatestLY on Jan 17, 2022 12:55 PM IST. For more news and updates on politics, world, sports, entertainment and lifestyle, log on to our website latestly.com).