The makers of Annabelle Comes Home have announced the film's release date. It is third film in the Anabelle series. 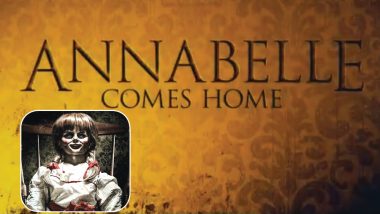 Who can forget the face of the demonic doll from the first and the second film of Annabelle? The makers have now announced about the third film on the demonic doll, which is the sixth instalment in The Conjuring Universe franchise. Warner Bros have released the title and the release date of this third film – Annabelle Comes Home. Avengers: Endgame New Trailer - Chris Hemsworth's Thor is Hitting on Brie Larson's Captain Marvel and We Are Totally Loving It (Watch Video).

The makers of Annabelle Comes Home have also released a teaser video in which we really don’t get to see anything but the background music will surely send shivers down your spine. The upcoming horror movie is a sequel to Annabelle (2014) and to Annabelle: Creation (2017). The Warrens will be back in this third installment. Yes folks, Patrick Wilson and Vera Farmiga will be reprising their roles as Ed Warren and Lorraine Warren respectively. Before Takht, Vicky Kaushal and Bhumi Pednekar to Star in Karan Johar’s Horror Film.

Mark the date... #AnnabelleComesHome - the latest instalment in #TheConjuring universe franchise - to release on 28 June 2019... In #English, #Hindi, #Tamil and #Telugu. Official announcement by #WarnerBros: pic.twitter.com/jWvTEWl99d

Annabelle Comes Home is directed by Gary Dauberman, which also happens to be his first film. He was the one who penned down the spin-offs and now would be making his directorial debut with this film. In this third series of Annabelle, we’ll see how the demonic doll targets the Warren’s daughter Judy (played by Mckenna Grace) and her babysitters (played by Madison Iseman and Katie Sarife). This supernatural horror drama is all set to release on June 28.

(The above story first appeared on LatestLY on Mar 16, 2019 12:39 PM IST. For more news and updates on politics, world, sports, entertainment and lifestyle, log on to our website latestly.com).