Talking about the petition, addressed to Courtney Simmons, SVP of Publicity & Communications for DC Warner Bros. and Paul McGuire, Corporate Communications of DC Entertainment - discusses how Amber is a domestic abuser. 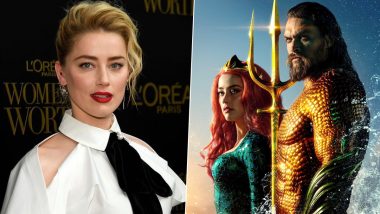 Amber Heard and Johnny Depp's divorce was major news a few months back. Following the lawsuit, Johnny Depp had to face a lot of trouble on the professional front and his fans were not at all happy about it. Depp had lost a libel case against The Sun over a headline that ascribed him as a "wife-beater." which further resulted in Warner Bros. asking him to resign from Fantastic Beasts 3. This was not taken well by his fans who then started a petition calling for the removal of Amber Heard from Warner Bros' Aquaman 2. Now, rumour has it that this might become true. Following the Johnny Depp Row, Petition to Remove Amber Heard From Aquaman 2 Crosses 1 Million Signatures!

While the petition or the libel might not be the reason for Amber's exit from the film, it has been learned that she indeed has been fired from the film. Reports suggest that Amber gained a little weight before the commencement of the shoot and the makers are not keen on continuing to work with her. Not just that, it is being said that Emilia Clarke who I known popularly for her role as Daenerys Targaryen from Game Of Thrones is all set to replace her. Amber essayed the character of Mera in the Jason Mamoa starrer.

A source told Australian site Sausage Roll, "Amber Heard did not pass her physical examination. She’s put on some pounds and is in terrible shape. There is a clause in her contract which says she is required to be in good form ahead of shooting and she violated that." It was also revealed that Amber's role was a very demanding one in terms of action and stunts and the production house terminated the contract after seeing how the actress was not in shape to take up the role. Popcorned Planet confirmed the same but no clarity on Emilia Clarke being a replacement for the actress has been given yet. Fans Trend 'Justice For Johny Depp' After Audio Clip Of Amber Heard Admitting She Hit Him Surfaces.

Talking about the petition, addressed to Courtney Simmons, SVP of Publicity & Communications for DC Warner Bros. and Paul McGuire, Corporate Communications of DC Entertainment - discusses how Amber is a domestic abuser and Warner Brothers should not glamorize her anymore. The petition has already crossed the 1 million signatures mark!

Earlier in 2019, it was reported that Depp had called on Warner Bros. to remove Amber from Aquaman. But this plea did not work in his favour and Amber went on to co-star in the billion-dollar superhero blockbuster film as Mera. Aquaman 2 arrives in theatres on December 16, 2022.

(The above story first appeared on LatestLY on Feb 28, 2021 03:56 PM IST. For more news and updates on politics, world, sports, entertainment and lifestyle, log on to our website latestly.com).